As of December 31, 2013 the NY minimum wage was increased to $8. On December 31, 2014 it will be raised to $8.75 and December 31, 2015 it will be raised to $9. On the surface this sounds like a wonderful thing. After all, how can it be wrong to forcefully prevent employers from paying their employees less than a certain amount? A cursory glance at the situation would conclude one to unconditionally support such legislation, however leading one’s life by making cursory assessments of situations would imperil one’s well being indeed. Taking a moment to examine the situation in a little more detail would quickly reveal the minimum wage laws to not only injure those at the bottom of the income pyramid, incidentally those it is intended to help, but it is also shown to be inherently racist, nefarious, and impoverishing.

Here is a stunning 5-minute animated cartoon explaining quite clearly what happens when government steps in and interferes with natural economic law of supply and demand, in this case the connection between the artificial establishment of a minimum wage and rising unemployment. The existence of the minimum wage is real proof of the Hegelian Dialectic that permeates the State in its mission towards self-preservation and self-justification. Simply put, the Hegelian Dialectic, as proposed by German philosopher Georg Wilhelm Friedrich Hegel, consists of thesis, anti-thesis, and synthesis, also known as problem, reaction, and solution. The “government” manufactures the problem through the rising cost of commodities due to inflation as a direct result of Central Banking currency creation and “government” borrowing of currency. The people then clamor and plead with their “politicians” for help resolving their dilemma of rising commodity prices. The “politicians” arrive on the white horse with their proposed solution of wage controls or minimum wage institution. The naïve public is completely unaware that they have jumped from the frying pan into the fire.

One’s labor has value based on the skills that one contributes to a company. These skills vary widely. Why does Brad Pitt get paid in the millions per movie whereas Joe six-pack only gets minimum wage at McDonald’s? (I am not insulting or downgrading the value that McDonald’s has had in allowing unskilled workers to easily enter the job market in order to compete with others.) Is this coincidence? Does Brad Pitt simply have better attorneys to force them to pay him in the millions? No, every job is 100% voluntary and based on mutual consent between employer and employee. If this were not the case that implies that there is an element of forced labor which implies slavery. To be characterized as a job one must always have the option to resign or quit. The reason Brad Pitt is paid in the millions is because of his superior acting skills, the high value he adds to any movie he participates in, and because his face is widely recognizable and desirable. To some people these attributes are worth millions. This is the main reason why Brad Pitt will always make millions over Joe six-pack with his forgettable face and lack of skills. 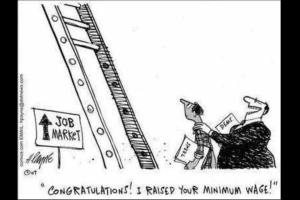 If one’s skills have a value of $7.25 then passing a law mandating the minimum salary to be $10, or $100 or $1000 would not change this economic reality. The main reason businesses exist is to make profits as this funds expansion, the purchasing of equipment, and the hiring of more employees. (As a side note, profits, when they are fairly made without “government” subsidies, grants, bailouts, tax breaks etc, are the notifications to business owners that their goods/services are satisfying some fundamental need or desire in society. They are not to be demonized in any respect, as often occurs in our crony capitalistic/socialistic society.) It stands to reason that if an employer would pay an employee more than the value his labor is worth, that employer is fundamentally losing money and will soon be facing the economic reality of bankruptcy. Given that inevitability, if an employer must obey such a “law”, he will fire the least needed and lowest skilled of all his workers and consolidate his company so as to continue his operations without losing money.

An unemployed man not receiving unemployment benefits is making $0/hour. (Unemployment benefits is another “government” contrived Ponzi scheme in which the hard working productive middle class is forced to pay into and support the idle and slothful. This system only engenders dependency and a genuine loss of ambition to further oneself.) It stands to reason that if he is willing to work for someone who is willing to pay him $1/hour, where is the crime? Indeed there is no crime, since in order to prove a crime has taken place one must demonstrate who the victim is. If both parties willingly and consensually come to an agreement then there has been no victim and therefore no crime. A separate argument may be made as to whether he is paid a “living wage” but this is irrelevant since the fact still remains that making $1/hour is better than making $0/hour, economically speaking. The main reason that an employer may not pay someone $1/hour “on the books” is the minimum wage law so therefore the existence of such a “law” immediately presupposes the creation of more poverty and unemployment. Denying a major section of the population access to the labor market because they lack the necessary skills to overcome the obstacle of minimum wage is condemning them to a life “government” dependency.

The real minimum wage is zero.”

As sinister as we may characterize “politicians”, I don’t think we can characterize them as stupid. They know the exact effects their “laws” have on the chattel of the “country” over which they rule. For the 53 years that the federal minimum wage has been in effect that is 53 years of increasing poverty and unemployment. That is 53 years of robbing the less skilled of possible job opportunities. That is 53 years of worsening inner city ghettos and gang violence. Who are typically the less skilled in our society? Not the whites of course. Typically the less skilled are Hispanics and blacks who are subsequently kept down and impoverished as a result of such specious legislation. Therefore the minimum wage “laws” are one of many racist “laws” that exist.

Political language is designed to make lies sound truthful and murder respectable, and to give an appearance of solidity to pure wind.”

Let it be plainly stated that I have more respect and less contempt for common thieves and murderers than for “politicians”. The reason for this startling assertion is that common thieves and murderers, although they have clearly violated the non-aggression principle, at least have the courage to do the shameful deed themselves and thereupon endure the associated consequences. They can blame no one but themselves for their wretched actions. The same cannot be said for “politicians”, who disgracefully delegate to others the condemnable duty to steal, torture, imprison, and murder everyday citizens. This is especially evident when they deploy troops overseas to “protect our country”, “spread democracy”, or whatever other drivel they conjure up as an excuse to murder foreigners, decimate their countries infrastructure, and take control of their natural resources. “Politicians” should be held accountable for the sundry atrocities they commit as genocidal megalomaniacs and should be prosecuted as sternly as society would a serial killer or serial rapist.

A suitable allegory for understanding the dynamics of employment, unemployment, and how minimum wage laws adversely affect them both is imagining a basement with steps leading out the basement into the house. The basement symbolizes joblessness and unemployment. The house signifies employment and the bettering of oneself through work experience. The steps signify the ability to elevate oneself from unemployment to employment through the freedom of employers to pay their employees whatever they agree is a suitable payment through their mutual consent. When employers are freely able to pay their employees any amount based upon their skills and labor value this provides abundant opportunity to the low skilled worker to contribute meaningfully in the labor market while at the same time building up one’s resume in order to later apply for higher paying jobs when his improved skills deem it necessary.

No “law” can ever produce wealth or prosperity by mere dictate. This is the hope of deluded persons who believe “government” is some wizard capable of conjuring wealth and prosperity at will. Alas the real world is thankfully more pragmatic. Wealth and prosperity is only created through the labor that the productive middle class injects into raw materials thereby turning them into useful goods and services.

The problem with Socialism is that you eventually run out of other people’s money.”

Working as an employee is definitely helpful to those will low skills trying to get a foot in the door and build work experience for their résumé. It should not therefore be considered as a career. If you have the drive and perseverance to be self-employed in your own business you should definitely do that. Besides the advantages of being able to keep all of your income and only declare what you want, you are following your own dreams rather than fulfilling someone else’s.

This is also why “sweatshops” and “off the books” work helps to alleviate the unemployment and poverty that minimum wage laws, licensure laws, and certification laws directly produce. They give gainful employment opportunities to those who don’t have the resources or means to endure the rigorous and expensive “education” necessary to obtain a license, certification, or permit.

If you think the problems government creates are bad, just wait until you see their solutions.”

In the business and economic world all things have a price. Other than sunshine, air, and rainwater (well that is changing as an Oregon man painfully discovered who was imprisoned for 30 days in 2012 for collecting illicit rainwater on his own property) nothing in life is free. There is no such thing as a free lunch. This is what sociopathic politicians base their rhetoric on when they appeal to the gullible mass of voters in the State worshipping event known as elections. The promise of allocating “free” money and goods stolen from the productive hard working middle class is the fundamental kernel on which all ‘government” models base their prosperity.

The Minimum Wage and Unemployment in Australia

Should Minimum Wage Be A Crime?

US Debates Raising Minimum Wage To Detriment Of Labor Force