Please enjoy my recent interview with Richard Heathen. Herein we discussed how he became an Anti-Statist/Libertarian, leftism in Canada, hating on successful capitalist Alex Jones, Ron Paul creating Voluntaryists, changing the system from within, the limits of Agorism, affecting the minds of law enforcement and military, defeating Statism on all fronts, Hidden Influence: The Rise of Collectivism, cultural Marxism, white privilege, divide and conquer, minimum wage economics, Leftist agenda, confused feminists, Social Justice university classes, clarification of terms, leave it up to the experts, passionate minority, Capitalism cannot be killed, Anarcho-Communists, Hitler and the National Socialist party, deferral of gratification, what is Capitalism, what’s so bad about Nazism, patriarchy and much more!

‘But what would you replace the state with?’ The question reveals an inability to imagine human society without the state. Yet it would seem that an institution that can take 200,000,000 lives within a century hardly needs to be ‘replaced’.

Money is the lifeblood of any economy. It is the lubrication that facilitates every voluntary transaction. When it is freely used amongst peaceful people it significantly raises the wealth and standard of living of society. Historically many items have been used as currency such as exotic bird feathers, beads, lumber, tobacco, cigarettes, candy bars, sea shells, copper, spices, salt, sugar etc. In order to satisfy the criteria of currency it must be divisible, fungible, portable, and durable. For various reasons these items have come and gone due to their unique inadequacies. 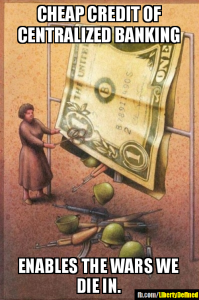 Money has all these qualities plus being a store of value over long periods of time. This supreme status has been achieved mainly by gold and silver. Historically when “government” hijacks and debauches money, the decline of society has already begun. This is known as the Wealth Transfer. Through the Mandrake mechanism, coin clipping, currency creation, money printing, interest rate manipulation, deficit spending, or pork/barrel spending “government” corrupts and devalues the purity of sound money. The Wealth Transfer is the sinister mechanism by which wealth is transferred from the industrious to the money controllers or political elite. This is known as the stealth tax of monetary inflation because not one man in a million will detect the source of this wickedness. 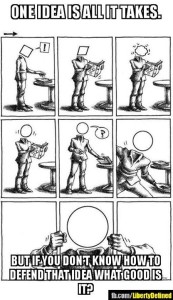 We must teach our children of this reality if we are to finally be free of this vicious cycle. We are the present but our children are the future. They will be the ones to carry the torch. To raise a child is to be a participant in molding the world of tomorrow. By teaching our children about self-ownership, property rights, and non-aggression we are teaching them to be thinking individuals capable of critical analysis. An intelligent mind is a more powerful force than any weapon man can wield and is the true enemy of any “government”. Ideas are what embolden the most ruthless tyrants and topple the fiercest regimes. If you wish to change the world you must first begin by affecting hearts and minds.

Please enjoy my recent interview with Bill Buppert, the founder of ZeroGov.com. Herein we discussed how he became an Anarchist, what is an Abolitionist, his hero John Wilkes Booth, all presidents are mass murderers, government diffuses moral responsibility, fear is the mortar and obedience is the brick in the house of government, the 100th monkey effect, taxation is organized thuggery, his experience in the military, the historical propaganda in government school, expelling intellectual Statist excrement, homeschooling/unschooling, lessons taught in government school, Pledge of Allegiance is socialist, what’s the difference between Nazi Germany and the current federal government, the little dictators of Democracy, why government is not like a condo association, chess club, or church, being off the political spectrum, government violates individual rights every day, free community college, the social contract, Bill’s book, impoverished but passionate Voluntaryists, appeal to force/stick, Marc Stevens, exposing the gun in the room, the fantasy of checks and balances, rule by kakocracy, the Stanley Milgram experiment, fear feeds obedience, oppositional defiant disorder, the insanity of Western Psychiatry and much more!