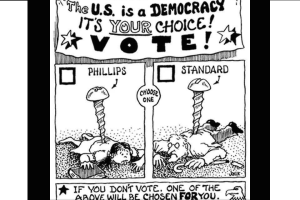 It is that time when the subjects are given the illusion to ritualistically choose who will sit on the throne of power and utilizes various political euphemisms and hackneyed platitudes as justification to carry out violence and threats of violence against peaceful people in all the manifestations approved by the vulgar masses for the next 4 years. If this did not affect me directly and my family I would keep quiet and mind my business. As this is an issue concerning the actions of the most coercive monopoly on violence of the land, namely the gang known as the U.S. Federal government, I am compelled to speak my mind.

My brothers and sisters, you need to stop legitimizing the desperate attempts of these sick sociopaths to sit on the throne. Their power is illusory but their effects are not when they are awarded legitimacy. It always rests on the consent and approval of the governed. Once the people realize that their participation in this farce is what causes and creates the most abominable evil in the world, there will be unleashed a supernova of peace and splendor, the likes of which the world has never witnessed. Power not only corrupts, but also attracts the corruptible. It is not that some are unfit to rule. All are unfit to rule. Vacate the State.

Voting, the be all and end all of modern democratic politicians, has become a farce, if indeed it was ever anything else. By voting, the people decide only which of the oligarchs preselected for them as viable candidates will wield the whip used to flog them and will command the legion of willing accomplices and anointed lickspittles who perpetrate the countless violations of the people’s natural rights. Meanwhile, the masters soothe the masses by assuring them night and day that they — the plundered and bullied multitudes who compose the electorate — are themselves the government.