Here are some provocative videos by Stefan Molyneux describing Bitcoin, the revolutionary new development in money and banking. It has been called “digital gold”. It is essentially a decentralized Internet currency or crypto-currency. It possesses much of the useful characteristics of gold/silver without the difficulty in physically storing it, which always carries the risk of theft. Powerful computers mine Bitcoin by solving long complex algorithms and, just like precious metals; it is quite scarce. As more and more Bitcoins are digitally mined the algorithms become increasingly difficult, mirroring the increasing difficulty in mining physical gold/silver in the current time as underground availability becomes scarcer. The total number of Bitcoins that can ever be mined is 21 million “coins”. Currently about 12, 467, 275 “coins” have already been mined. “The last block that will generate coins will be block #6,929,999 which should be generated at or near the year 2140.”

Bitcoin is an open source code, meaning anyone can view and make additions to the code if they so choose. There is nothing obscure or hidden about it, except the anonymity one has when transacting with it. One potential flaw is the block chain, the inherent code that records every Bitcoin transaction that has ever been done. Logically this would get larger with each transaction achieving monstrous proportions which may potentially hinder the speed and efficiency of future transactions, although this “bug” may be corrected by some enterprising programmer in the near future.

Satoshi Nakamoto introduced Bitcoin into the market on January 3, 2009. He promptly retreated into obscurity after giving it to the world, further increasing the mystique and intrigue that Bitcoin has gained. Recently it has been rumored that he has been found to be living in Los Angeles, CA of all places. His stubborn reluctance to admit to his involvement in Bitcoin is irrelevant. The important thing is someone created digital currency and, through open source programming, delivered it to the world. Various other crypto-currencies have emerged as a result. The cat is out of the bag and there is no way it can be shoved back in.

The March 2013 Cypriot bank bail-in catapulted Bitcoin’s value by 87% to the upside from $47 USD per Bitcoin on March 16 to $88 USD on March 28. Cypriot depositors quickly tried to move their wealth into Bitcoin while the Cypriot government was contemplating how much wealth to steal from the people. “That compares with just 5 cents per bitcoin in mid-July 2010, when Mt. Gox first started tracking prices.” The Bitcoin price stands at $612 USD per Bitcoin as of the publishing of this article. 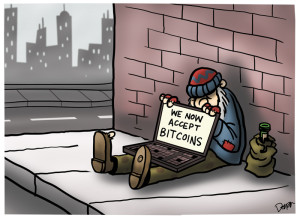 There is no central hub where all Bitcoins are stored; rather they are disseminated widely throughout the web in the form of digital wallets secured by passwords and keys. This is one of its greatest strengths, since the more popularity it gains the more Central Banks and “governments” around the globe will feel threatened by it and seek to shut it down as they have already done with the Silk Road. However instead of dampen the excitement; this suppressing effort only stimulated the rise of larger and more efficient Bitcoin marketplace sites most notably in the elusive black market arena, which is the natural by-product of any “government” ban.

There have been at least eight reported top level banker “suicides” as of January 2014. Some walked off the rooftops of large financial buildings in London. Another banker shot “himself” multiple times in the head with a nail gun. This is occurring amidst a back drop of European Sovereign debt crises, speculative derivative gambling, US bank insolvency, market manipulation of precious metals and other commodities, Bail-ins, and past Bail-outs. This must not be a surprise when it is recognized that poverty, unemployment, and those receiving federal aid are reaching record heights not seen since the Great Depression. Incidentally the increase in the frequency of suicide mirrors what occurred around the time of the Great Depression of the 1930s. If this wasn’t enough a recent report of a 28 year old Bitcoin firm CEO is that she was found dead in her Singapore apartment, of alleged “suicide”. This seems to be the first reported Bitcoin related death. I think you can see the pattern.

Bitcoin can be inherited without the need of a lawyer and is therefore free of inheritance tax. Bitcoin can be used with ease when purchasing from companies far from one’s home country and completely bypasses all the fee and taxes that are incurred when using traditional methods such as debit cards, credit cards and PayPal. Bitcoin can be transferred over long distances for the purposes of money transfer, again without incurring hidden fees and taxes along the way.

Any alternative to “government” programs is a risk worth taking. If the Federal Reserve Note is such a stellar currency why must it be forced upon us? Repeal legal tender laws! Allow competing currencies and we will see how good it fares in the rigorous Free Market! Military might ensures its apparent stability and is illusory at best since the military itself is financed by debts incurred by and written in the blood of our children and grandchildren that are yet unborn. Few other crimes are more sinister.

One advantage Bitcoin has over precious metals is its utility of use in daily transactions. Precious Metals are useful as a store of value and as wealth preservation over long periods of time. They are especially useful in times of economic crisis as in what we are experiencing now; however the strategy with them is more “buy and hold”. Unfortunately their success is hinged on the inability of Central Bankers to keep their prices artificially suppressed and simultaneously “kick the can down the road” with currency debasement and Quantitative Easing. This is a dangerous underestimation of the competency of Central Planners to keep the house of cards standing amidst a vicious tempest and atop merciless quicksand. The inertial power of the bureaucratic machine is not to be taken lightly.

There has been a raging debate in the Libertarian Austrian Macroeconomic community of Bitcoin vs. Gold/Silver. The precious metals advocates say it is not tangible therefore it does not have intrinsic value which is the hallmark of owning precious metals. The value of precious metals is not artificially determined by parasitic “governments” but by free and peaceful people exchanging them in the Free Market for other things of value. What is intrinsic value essentially? Does anything really have intrinsic value before humans came along and started using them? Bitcoin advocates say just because it intangible does not mean it is worthless. Is e-mail worthless because it is intangible? Ultimately, is the Internet worthless because it is intangible? Anarcho-Capitalism calls for an entirely Free Market devoid of any State intervention, therefore competing currencies will naturally result as the market creates new and exciting methods of monetary transactions. Having a wide range of competing currencies is reflective of a healthy Free Market. This calls into question our most fundamental assumptions about the definitions of currency, money, and intrinsic value. Such debates are necessary to the advancement of human progress.

Each day forward draws new businesses to the attractive world of digital currencies. The ease of use and rapid transaction is a boon to any entrepreneur who is sincere in his desire to please his customers. As more people are choosing to inject capital into Bitcoin it is quickly becoming an emerging economy that cannot be ignored. Some businesses that accept Bitcoin include a Subway franchise owner in PA, Virgin Galactic in exchange for a private spaceflight of $250,000 per seat, Ebay, Shopify, and others. A good website to find other businesses that accept Bitcoin is SpendBitcoin.

Bitcoin is not meant to be held on to for any significant period of time. Partially due to its volatility as a young currency and partially due to the nature of the program, Bitcoin is most useful in immediate transactions as a way to transfer value over vast distances completely escaping the bureaucratic labyrinth of taxation and regulation. This is one of the major reasons why it has become so wildly popular and also why “national governments” and their Central Banks are genuinely afraid of it. Its incorporeal quality eludes authoritarian control freaks because they cannot move in, seize, and confiscate the “coins” from any one single area. This represents the power of the Internet and the potential it has for setting the people free from the State.

Various “governments”, including China and Thailand, have moved to ban Bitcoin for the potential “threat” it represents to their national currency and “economic stability”. This excuse is hollow at best. What displeases “governments” the world over about Bitcoin is the fact that it is completely decentralized, untaxed, and unregulated. This is the source of its true beauty! It was conceived in the free market and is flourishing in the free market! Its value is determined solely by individuals voluntarily injecting capital into its adaptable system. The only threat that Bitcoin represents is toppling the centuries old strangle hold that international financiers have had on the global economy. There are currently only 3 countries on Earth which do not have central banks; Iran, North Korea, and Cuba. America’s recent military focus in the Middle East may be explained by an attempt to install another Central Bank in Iran. The appearance of Bitcoin has done much to release the debt/death based monetary system that is slowly suffocating the productive class of the world.

A great Wealth Transfer is occurring. The present system is dying and some will not survive as the scandalous truths of fraudulent misdeeds are revealed for all to see. We are privileged to witness this grand global shift that is both uniquely unprecedented and historically repetitive. These currency crises and Wealth Transfers have occurred many times in history as various past “governments” have stolen as much as they could from the industrious in order to keep their murderous regimes afloat. The uniqueness refers to the Wealth Transfer as being a global phenomenon as August 15, 1971 was the first time in history that all currencies of the world went off the gold standard and became fiat currencies simultaneously. Given the rise of the Internet this is the first time that crypto-currencies were ever used as means of exiting a failing financial system. I do believe they are here to stay. Where will your wealth be when the US dollar returns to its intrinsic value of zero?