We have all heard about the rumors of an impending “Economic Collapse” or “Collapse of the Dollar”. Although this is true as it has happened many times throughout history, the descriptive wording implies that it is a doomsday scenario where all will suffer. This is not entirely accurate. Some will suffer and some will prosper. All this depends on where one is physically and how well prepared one is financially or otherwise for such an event. For these reasons a better description for such an event is a “Wealth Transfer”. Wealth, like matter and energy, is never destroyed it is merely transferred. It is your choice whether to have it transferred towards you or away from you. The greatest fortunes have been amassed out of the rubble of economic crisis by enterprising individuals. It has always been about choice. 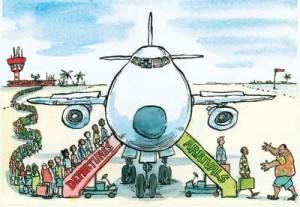 I hope you take the time to listen to this wonderful interview. Jeff Berwick discusses Bitcoin and the importance of internationalizing oneself as well as one’s assets in a time when the “wealthy developed”, albeit inescapably drowning in sovereign debt and unfunded liabilities, countries of the world are staging their last desperate attempts at solvency by looting and squeezing the middle class out of every last bit of productivity they have left. It is all too easy to get distracted and depressed with the abundance of so called “doom porn” that infiltrates the Internet. The promulgation of such information does have its place when a people are too complacent, by way of ignorance, with allowing their resident criminal gang, to operate unaccountably through wanton theft and exploitation of their middle class. However once this is established we must seek opportunities to ensure our prosperity and happiness. If this includes leaving a given geographical tax farm (country) and emigrating to another with comparatively greater economic, social, and financial freedoms than that is the choice we must make.

People and their businesses, like water, naturally move from regions of high oppressive pressure to regions of low pressure. This is a natural law of human behavior. A suitable term to describe this behavior is “brain drain”. According to Dictionary.com this is defined as “a loss of trained professional personnel to another company, nation etc that offers greater opportunity.” What we are discussing here is geographical brain drain from oppressive geopolitical regimes that are on the verge of collapse. This has happened many times in the past in the regions of Communist China, Soviet Russia, and Nazi Germany to name a few.

2013 marks a record year for renunciation of citizenship by US taxpayers, exceeding by two-thirds the previous high set in 2011. Since 2006, expatriations have increased tenfold from the US. 630 individuals renounced US citizenship or ended long-term US residency by turning in their green cards during the fourth-quarter. The fourth-quarter figure increased the total number of expatriations for 2013 to 2,999. The previous record was 1,781 in 2011. That’s a staggering 221% increase!

The ironic part is that the US received many notable minds in the 1930’s and 1940’s that were fleeing Nazi Germany and the surrounding countries they sought to conquer and entering the relatively freer US, whilst in recent years that trend is now in complete reverse. Some of these departing luminaries included “earlier Nobel laureates Erwin Schroedinger (physics, 1933) and Victor Hess (physics, 1936), but also future honorees — like Elias Canetti (literature, 1981), Walter Kohn (chemistry, 1998) and Eric Kandel (physiology and medicine, 2000)”.

This geographical brain drain is what also gave rise to Hollywood in the 1930’s as Eastern European Jews fled Nazi occupied territories to the freer USA. They established Hollywood as the movie making center of North America for that was the place where their varied talents were most appreciated. The laughable result is that persecuted Eastern European Jews would travel across an ocean to sell their version of the “American Dream” to Americans themselves who willing bought the product!

In this podcast Joel describes the lifespan of the Argentine currency as being roughly a decade long, an astonishingly short amount of time, even in fiat currency standards! Historically most fiat currencies last 30-40 years before reverting back to their intrinsic value of zero, regardless of the last ditch efforts that politicians frequently employ to sustain the looting inflation.

One notable example is ancient Rome. Currency debasement was a method used by the Roman government to pay for public works and distant wars. The coin of the realm, the denarius, was debased to only 0.02% pure silver and commodity prices soared. Emperor Diocletian enacted draconian price control laws which were meant to stabilize the currency. The failure was epic and legendary. The year was 301 AD and “Diocletian issued an extensive edict fixing the prices for just about all goods and services, including 900 commodities, 130 different grades of labor and a number of freight rates.  The death penalty applied to violations of the edict. Nevertheless, they failed in their purpose. As Lactantius tells us, ‘much blood was then shed over small and cheap items.’ Soon there was nothing for sale and the inflation got worse. Finally, after ‘many had met their deaths, sheer necessity led to repeal of the law.’”

Study some real history, not the Disney version of history we were force fed in our government schools. Educate your kin! Present day humanity need not suffer for the ignorant decisions of our forefathers! Proper historical and economic education is more than a means of entertainment. It can mean the difference between a life of back breaking hardship and a life of comfort characteristic of prescient foreknowledge. There is nothing new under the sun. The choice is yours.

The first panacea for a mismanaged nation is inflation of the currency; the second is war. Both bring a temporary prosperity; both bring a permanent ruin. But both are the refuge of political and economic opportunists.