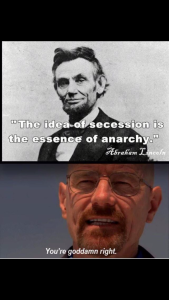 “What is your goal? Smaller and more homogenous countries/nations/villages?”

Yes I most certainly advocate for decentralization down to the individual. There is no minority greater than the individual. If a “government” claims to defend minorities whilst trampling over the natural rights of peaceful individuals engaging in voluntary trade than that “government” is by definition illegitimate.

I would even go further to say that the idea of a legitimate “government” is an oxymoron. Even if there existed a “government” that did absolutely nothing, it is still subsisting by taxing the people, which is the violent robbery of currency from productive individuals who have legitimately earned that currency by using their talents, skills, and labor in the market.

Taxation is theft. If taxation were truly voluntary then the people would not have to be threatened with kidnapping, being thrown in a cage, being tasered, beaten, or murdered should they elect to not pay. If taxation were indeed voluntary then it no longer be taxation and the State would transform into a business providing a service/good that people voluntarily purchased. This would essentially be peaceful voluntary anarchy.

“Once one concedes that a single world government is not necessary, then where does one logically stop at the permissibility of separate states? If Canada and the United States can be separate nations without being denounced as in a state of impermissible ‘anarchy’, why may not the South secede from the United States? New York State from the Union? New York City from the state? Why may not Manhattan secede? Each neighbourhood? Each block? Each house? Each person?”  ― Murray N. Rothbard