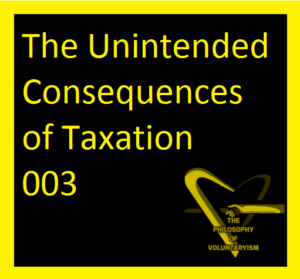 What is the true cost of interjecting unwarranted coercion into peaceful acts?

That’s a huge question to answer. We break this down into smaller, yet still fairly big topics.
-The Broken Window Fallacy
-The Tragedy of the Commons
-How taxes coerce conformity in other aspects of life
-How tax funded regulations encourage poverty

The unintended consequences of taxation are nearly infinite. What doesn’t have to be is our nescient about them. By understanding what wealth, how it is created, and what its purpose is we can break down the idea of taxation and show the world what it really is:

A practice befitting a less civilized, intelligent, and courageous period of Humanity’s history.

The Burden of Being an Enlightened Tax Slave

More about The Philosophy of Voluntaryism

The Philosophy of Voluntaryism gear, such as mugs, knapsacks, t-shirts, dresses, and more also coming soon!

Philosophy of Voluntaryism Ep 3: The Unintended Consequences of Taxation – Steemit

“I really don’t understand what is your proposition with the Peaceful Anarchy page. Going back to tribal societies?”

No I am not a Primitivist or Luddite. I do not think civilization or technology is the problem. Indeed I believe it is no coincidence that both of these magnificent things have developed in conjunction with each other throughout the epochs. The comforts of modern day civilization are the direct result of entrepreneurs and creative inventors who, through the use of their superior imaginations, have solved many of the basic problems that have plagued our ancestors for time immemorial. We have slowly developed the ability to grow and store more food, improved our health and longevity through improvements in medicine, sanitation, and sewage treatment, live in more advanced dwellings, insulated ourselves from the elements with good quality cheap clothes and shoes, and increased our ability to travel to distant locations with machines such as cars, helicopters, and planes.

Keep in mind these are all the results of peaceful individuals engaging in consensual and voluntary trade AKA Free Market Capitalism. This has absolutely nothing to do with the group of bureaucratic parasites and violent sociopaths who form the entity known as “government”. By definition parasites can only exist when there is wealth and productivity from which to derive their nourishment. They produce nothing themselves and would immediately die should there be a lack of foodstuffs for them to feast on.

I sit on a man’s back, choking him and making him carry me, and yet assure myself and others that I am very sorry for him and wish to ease his lot by all possible means – except by getting off his back. 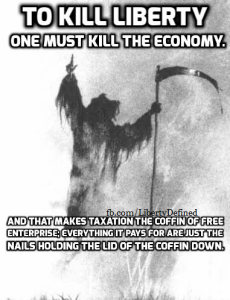 With sufficient imagination one can always conjure up the outlandish exception to the rule. I am not interested in satisfying all possible individual scenarios. I am only interested in discovering dependable moral principles on which to base my life. Individual situations must be dealt with given those specific circumstances. It is not my place to think of an answer to all of them.

True freedom is not the recognition that there will be no moral dilemmas, but that those dilemmas will not be given the moral pass that the State or any action that appeals to the State claims to possess. This undoubtedly applies to receiving stolen currency in the form of financial aid or grants from the State. No amount of appeals to pity or appeals to emotion will change the immorality of asking for stolen currency from a monopoly on initiated aggression. It does not matter whom the stolen currency goes to and for what purpose it is used. If a thief steals my currency and then assures me that he will use it for helping his sick grandmother that still would not excuse the violent expropriation of currency AKA theft. It does nothing whatsoever to alter the initial immorality of the act. The ends never justify the means. This is a principle I will never concede. Once the compromise of one’s principles begins it is often the precursor to rationalizing truly monstrous acts. 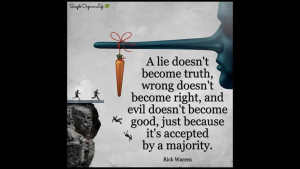 “You seem to be educated enough to realize that there is such thing as an efficient and functional sovereign states (mostly the scandinavian).”

I am not interested in what is functional or works well. I am interested in what is moral and right. Many people thought that a society based on chain slavery was “efficient and functional”. If you have the ability to rob your neighbor and get away with it instead of earning your currency would you do that? I should think not. If it is immoral for you to rob your neighbor by threat of violence to fund what you want, would it be immoral for a large group of your friends to do the very same thing? What about if you elected a representative to do the very same thing on your behalf and call it taxation? Does the morality of the situation change anywhere along the way. I would submit that it has not. Theft is wrong whether done by an individual, group of private individuals, or a group of individuals calling themselves agents of the State.

Morality is not a numbers game. Wrong is wrong no matter if everyone is doing it. Right is right no matter if you are the only one doing it. The laws of morality are as universal and consistent as the laws of mathematics, physics, and thermodynamics. Just because there are people who practice bad mathematics does not invalidate mathematics. In the same way just because there are some people who survive off of theft, assault, rape, and murder does not invalidate morality. If it cannot be universalizable it is an invalid concept. 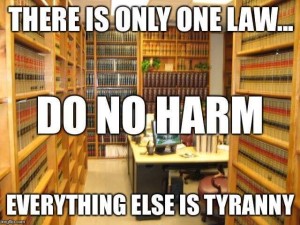