The Winter Olympics is being held from February 7 – February 23 in Sochi, Russia. What lies in the background that is not being reported upon when you see these brawny men and women compete for the ultimate coveted gold medal, which is in fact composed of 92.5% silver and plated with 6 grams of gold? Let us examine this nationalistic tribal event known as the Olympics.

Stefan Molyneux delivers an insightful look into the world of the Olympics. In many ways it is not too dissimilar from the world of the NFL Super Bowl. They are both products of the Crony Capitalism we have all grown accustomed to and have taken for granted as normal. Let me assure you they are not normal. They are the product of a severely diseased predatory economic system that artificially props them up through “government’ subsidies and generous grants at the taxpayer’s expense. How is it possible that $51 billion can be spared to pay for the Sochi Winter Olympics in a post 2008 housing crisis recession filled world where many are unemployed, homeless, and living well below the poverty level? Truly this must be one of prime examples of “bread and circuses” in the midst of a crumbling empire as such State supported games can only cater to the ultra rich and well connected. 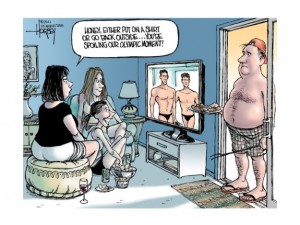 Another tragedy is that amidst all of this stolen wealth that is thrown around, the Olympic athletes that trained their entire lives for moments to compete such as this are barely compensated for their strenuous efforts. The rigorous training they endure from early childhood can be compared to the genuine inhumanity of child prostitution and human trafficking. This is not even including the obscure reports that have surfaced of male/female childhood sexual molestation perpetrated by the coaches. This child abuse is facilitated by the fact that the parents are typically barred from attending the grueling training sessions of the young athletes.

Most of the stolen currency used to fund the fabulous Olympic projects is generously given to the construction companies, Olympic committee members, judges, and any other entity that directly benefits from the exploitation of these tortured souls. One reason why all of this waste is accepted by the financially hurting masses is due to the issue of nationalism. When supporting such a magnificently wasteful activity can be attributed to being patriotic to one’s country it not only pardons the waste but celebrates it. The more such massively extravagance is allowed to persist the more we are, in effect, glorifying the acceleration of our own societal Wealth Transfer.

Similar to the ever accelerating expansion of the universe, our society is not slowing down on its path towards the Wealth Transfer; rather it is significantly speeding up. This may provide us some consolation amidst this mess that the deterioration may soon come to an end so that we may begin the process of reconstruction, as masochistic as that may seem.

Haha here is hilarious new line of action figures in perfect harmony with the Crony Capitalism of the day! A perfect gift for your Statist friends. They’re Konnected!