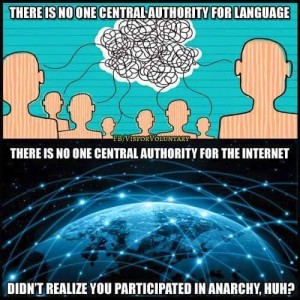 “Aren’t the concepts of Liberty and Anarchy diametrically opposed to each other? How do you maintain Liberty in the absolute absence of any laws?”

In the same way that Oligarchy is rule by a few, and Monarchy is rule by one, Anarchy is translated as rule by no one. In this case “ruler” specifically refers to those megalomaniacs who enter into the coercive institution known as the State to vie for the reins of power. The nature of the State is inherently violent and forceful. It is not elegance, it is not brilliance, nor is it sparkling originality. It is an entity that deems it necessary to force its destructive ideas onto a population that becomes proportionately impoverished as a result. If the ideas were so magnificent they would not need to be forced onto anyone, rather the people would willingly embrace them voluntarily. Good ideas do not require force. If your ideas require force, they are worthless.

According to Google the definition of Liberty is “the state of being free within society from oppressive restrictions imposed by authority on one’s way of life, behavior, or political views.” Hence Liberty is entirely consistent with Anarchy. It is the freedom to live one’s life in any manner one so chooses according to the Non-Aggression principle so long as one does not trample on the self-ownership or property rights of another human being. Liberty is the foundation of any truly civilized society. The extent to which it is hindered is the extent to which prosperity and wealth is destroyed. Free men and women do not ask permission.

You can chain me, you can torture me, you can even destroy this body, but you will never imprison my mind.