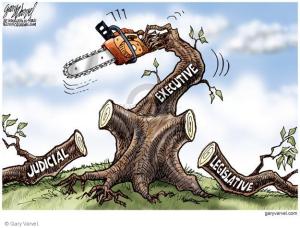 “I don’t believe we all really have, or want to have, or should have, the time to become familiar enough with current law and become educated enough to make informed decisions regarding law creation.”

This is one of the core points of my argument. It is fundamentally unnecessary and societally quite destructive for us to agree democratically to enact any man-made law because this always presupposes the existence of a “government” with guns and violence that will have to back up those man-made laws with force. Given that humanity is fallible and imperfect this would always end in the destruction of the individual rights of the minority at the expense of the majority. The health of a society always rests upon the protection of individual rights and democracy is by definition the complete disregard of them. Any existence of “government” necessarily implies the violation of individual rights, regardless of the size of that “government”. If you give “government” the power to tax you at .5% of your wealth there is nothing to stop it from swelling to gargantuan proportions and becoming tyrannical and oppressive. The US was an experiment in limited “government” and look where that got us. 🙂

“Ideally, each of the three branches is equally powerful.  One branch makes the laws, one executes/enforces them, and the last applies the law in the individual cases that arise.  However, the executive branch also has the ability to reject the creation of the laws (control over legislative branch), and appoints chief justices for life (control over judicial branch).”

No that would not be ideal in any sense. The problem I have with “government” is its status as monopoly on violence, it’s the fact that it is a giant one size fits all solution. The fact that all three branches of “government” are all on the same payroll and essentially beholden to no one, lends one to recognize the conflict of interest that permeates the entire situation. In no other context, but “government”, would we tolerate such a conflict of interest because we all understand that such a situation will always produce skewed and distorted results. It’s insanity!

It is not geared at the satisfaction of the people to any extent, given that it has all the guns it does not need to. By definition it does not have any other entities competing for dominion, for if it did it would no longer be “government” and would be elevated to the status of a private business that is wholly dependent on customer satisfaction and voluntary transaction.

It is not that I am searching for the just the right amount of institutionalized violence in order to reach Utopia. I would like to abolish the existence of the institutionalized violence completely! I do not wish to reform the amount of “government” sanctioned theft, assault, rape, and murder in society. I wish to abolish it completely! Admitting that “government” is a necessary evil is to admit that evil is necessary. I do not wish to move to an area of the cesspool with less feces. I wish to exit the cesspool.