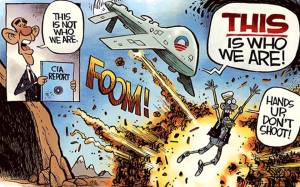 A few things have significantly altered the modern battlefield and the ways in which war is waged, two in particular. One is the appearance of nuclear weapons and the other is drones. According to Dictionary.com a drone is defined as “any unmanned aircraft or ship that is guided remotely.” Drones, AKA unmanned aerial vehicles, come in all shapes and sizes as well as for various purposes. Regarding the military and law enforcement, drones are mostly used domestically for surveillance, traffic monitoring, crowd control, and the occasional air strike and internationally for surveillance and air strikes. They have been killing foreigners with taxpayer stolen funds and through fiat currency creation since November 4, 2002 when the “first known US drone strike against Al Qaeda operatives took place in Yemen.” That mission killed six suspected militants. The most popular and most widely recognized drone used by the US is the MQ-1 Predator. It has been spotted wreaking death and destruction in such countries as Afghanistan, Iraq, Pakistan, Yemen, Libya, Somalia, and Bosnia and Serbia. 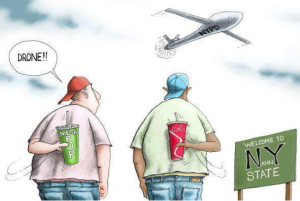 Now quite apart from the thousands of people who have been killed or maimed by these air strikes, two pertinent questions arise. Who are the sick twisted sociopaths that operate these killer drones? How do they sleep soundly at night? Truly one must be quite far removed from one’s conscience and moral compass to such an exaggerated degree just to assume such a job. Drone victims are known by their operators as “bug splats”, since that’s what they appear to be on their monitors. Double tap refers to the sinister action of a drone firing its first then missile and then waiting to fire its second missile when friends and family come to help and care for the injured of the first strike.  This belittlement of the value of human life is necessary if one is to continue in a normal functioning state in such an environment.  Nevertheless the incidence of Post Traumatic Stress Disorder, alcohol abuse, and suicidal thoughts is not absent even when one is physically far removed from the slaughter. 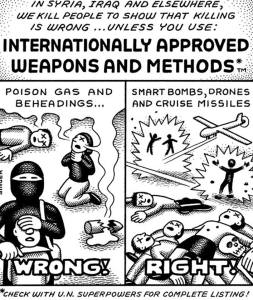 The fact that an MQ-1 Predator drone priced at $4.03 million drops a Hellfire missile priced at $68,000 to destroy mud huts and tents sheds a bit of light on the insanity that is occurring, all at taxpayer expense. The cost of satisfying the nationalistic blood lust of the West is a stagnant economy, depressed job market, out sourcing of labor and the skyrocketing homelessness, joblessness, and welfare. These tragic consequences are the karma we all must endure as long as we tolerate this overseas carnage to be done in our name. It turns out that genocidal war fever is expensive! Paying your taxes and obeying the law is the open approval of a “government” hell bent on the wholesale extermination of anyone who lives differently or happens to live in a country with attractive natural resources. Show your disapproval! Withdraw consent! Participate in the counter economy! Participate in the black market! By these methods practiced by a significant minority even the mightiest imperialistic empire can be brought to its knees.

How can you have a war on terrorism when war itself is terrorism?