Here is a fascinating look into the dark underworld of Child Protective Services (CPS) by whistleblower and Voluntaryist Carlos Morales. In order to sic the rabid dogs of the CPS on alleged “negligent/abusive parents” and permanently destroy their family structure all that is required is an anonymous phone call by a misguided Statist. Negligence includes homeschooling their children among other things. Abuse includes marijuana use by the parents, leaving one’s child outside alone for 3-4 hours, one’s child being too thin or too fat etc. Rarely does “abuse”, resulting in violent separation of children from their parents, constitute true physical or sexual abuse. 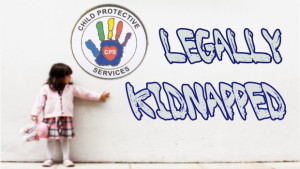 The CPS investigators themselves, despite having the power to rip apart the entire family structure and destroy the lives of healthy children, are only required to possess a Bachelor’s Degree in ANYTHING and must complete a simple 2 month training course prior to beginning. Once the anonymous call is made the CPS dogs are deployed to places where children are already physically separated from their parents, such as government schools, after which they bring them into a secluded room, ask them leading questions intending to fabricate the “evidence” needed for separation, and record the entire conversation. The formula is foolproof and often achieves its desired goal. Once in the State orphanages, the children are more likely to be abused (physically, emotionally, and sexually), more likely to get diagnosed with a multitude of psychiatric disorders requiring the administration of several powerful anti-psychotic drugs, and more likely to die while there.

This level of abuse is many magnitudes times worse than the majority of so called “abusive” households. This is the sort of reckless and unaccountable behavior that results from giving a “government” agency the power over the lives and future of children. Once the State assumes control over a sector of society and funds it with extorted currency obtained at the point of a gun, all accountability and decency is lost. Without the humanizing element of competition relentlessly driving a business towards perfection, it will necessarily degenerate into decrepit irrelevancy as it becomes eclipsed by all other freely developing businesses. Child protection and the prevention of child abuse are no different. The State is the stagnating force that corrupts all things wondrous and beautiful!

There is no school equal to a decent home and no teacher equal to a virtuous parent.