On March 6, 2014 Barack Obama signed yet another executive order proclaiming in no uncertain terms the extent of his domination over his subjects, us the little people. According to Dictionary.com an Executive Order is defined as “an order having the force of law issued by the president of the US to the army, navy, or other part of the executive branch of government.” This executive order entitled “Blocking Property of Certain Persons Contributing to the Situation in Ukraine” states in typical political Doublespeak and all encompassing general legalese that “actions and policies of persons — including persons who have asserted governmental authority in the Crimean region without the authorization of the Government of Ukraine — that undermine democratic processes and institutions in Ukraine; threaten its peace, security, stability, sovereignty, and territorial integrity; and contribute to the misappropriation of its assets, constitute an unusual and extraordinary threat to the national security and foreign policy of the United States, and I hereby declare a national emergency to deal with that threat.” This is in direct response to Obama’s desire to meddle once again, at taxpayer’s expense, in the affairs of a sovereign country whose problems are entirely their own. The crushing national debt, unfunded liabilities, bankrupt Social Security, soaring unemployment, poverty, and homelessness are small indicators that Americas so-called “wealth” as a super power is both illusory and deceptive.

Although I do not think we need any masters at all and the US “President” is just a puppet, strictly speaking Obama does not lead his predecessors in terms of number of Executive Orders issued. However he far outclasses the previous Presidents in terms of budget for military might, size and strength of the military, NSA surveillance scope, general size of the Federal Government, number of military bases in foreign countries, militarization of the police, number of drone strikes and resultant deaths, percentage/absolute number of people unemployed, in poverty, and on some kind of government assistance etc. Since he is just a figure head he may not be entirely to blame. He is simply the current face on the boot that is currently stomping on our collective faces.

The US President who has the record for the most Executive Orders issued is FDR at 3,522 which computes to almost one Executive Order per day in office! This is an amazing feat given the fact that he is the only US President to be elected for four consecutive terms. The US President with the record for the least Executive Orders is held by William Henry Harrison, the 9th President of the US with zero. This was mainly due to the fact that he died in his 32nd day of office from “complications from pneumonia.” It is plainly seen that, given the opportunity, sociopathic megalomaniacs such as US Presidents will meddle with the Free Market as often as is humanly possible. This is always done under the euphemistic cover of “stimulating the economy”, “creating jobs”, “regulating industry” etc. The results of this “stimulus” are apparent to anyone who opens a true history book to learn about the destruction of human capital and annihilation of productive potential that lays scattered along the field of the violated marketplace.

It has been stated by Aeschylus (525 BC – 456 BC), the Greek tragic dramatist, that “In war, truth is the first casualty.” This refers to both the truth as to the hidden motives for going to war and the silencing of the dissenters protesting the war itself. There are numerous cases of this common State behavior in US history alone. The famous Revolutionary War and subsequent signing of the victorious Declaration of Independence in 1776 brought hopes of true freedom to the inhabitants of the newly independent country. However the American people were duly disenchanted when their newfound masters brought the true intention of their previous revolutionary effort to fruition. With the drafting of The Constitution of the United States in 1789, their new rules of servitude, the next American experiment had begun as a “Representative Republic” of limited government which was to lead to the most powerful and imperialistic “government” the world has ever seen.

Among the early usurpations of the “freedom” of speech were the Alien and Sedition Acts of 1798, a group of four bills signed into law by President John Adams. Under these draconian measures “freedom” to speak out in opposition to the Quasi-War, Undeclared Naval War with France, was violently suppressed by threat of deportation or imprisonment. During the War of 1812 “Many members of the Democratic-Republican Party viewed opposition as treasonous or near-treasonous once war was declared. The Washington National Intelligencer wrote that, ‘WAR IS DECLARED and every patriot heart must unite in its support.’ The Augusta Chronicle wrote that, ‘he who is not for us is against us.’” Such hate speech of those critical of governmental action was vividly spoken by President George W. Bush after the 9/11 attacks. This illustrates the mindlessly patriotic “us vs. them” mentality that permeates nationalism. 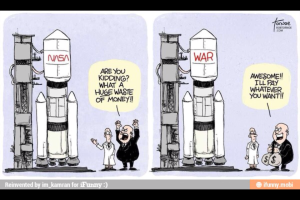 Many mistakenly blame Obama and Bush for their destruction of habeas corpus and right to due process following the “attacks” of September 11th; however the removal of these rights has been commonplace for US Presidents during times of war for more than a century. The term “habeas corpus” is Latin for “you may have the body” and refers to the right that “a prisoner can be released from unlawful detention—that is, detention lacking sufficient cause or evidence.” On April 27, 1861, just two weeks after the commencement of the Civil War, President Lincoln “suspended the writ of habeas corpus between Washington DC and Philadelphia to give military authorities the necessary power to silence dissenters and rebels. Under this order, commanders could arrest and detain individuals who were deemed threatening to military operations. Those arrested could be held without indictment or arraignment.” The famous Emancipation Proclamation was signed into law as a war measure on January 1, 1863 which freed only those slaves in the Southern Confederate States which were in rebellion, an act which intended to cripple the strength of the Southern States to resist. Thereafter in July 1863 the bloody Civil War Draft Riots began in response to forced Conscription of the Northern States and their freed slaves. One could only escape such a deadly fate by payment of a $300 commutation fee to find a substitute to fight for you. The equivalent of $300 in 1863 is $5600 in 2013.

The next example of the destruction of civil liberties occurred during World War I under President Woodrow Wilson. The passage of the Espionage Act of 1917 prohibited “any attempt to interfere with military operations, to support U.S. enemies during wartime, to promote insubordination in the military, or to interfere with military recruitment… This was punishable by a maximum fine of $10,000 or by imprisonment for not more than 20 years or both.” Later it was amended by the Sedition Act of 1918 “which prohibited many forms of speech, including “any disloyal, profane, scurrilous, or abusive language about the form of government of the United States … or the flag of the United States, or the uniform of the Army or Navy” Even after the conclusion of World War I the Espionage Acts continued to be used “as the basis for mass arrests and intelligence gathering.”

The arrival of World War II brought new sociopathic evils which included the forced internment of 127,000 Japanese-Americans, 3200 Italian-Americans arrested (300 interned), and 11,000 German-Americans arrested (5000 interned). On February 19, 1942 President FDR issued Executive Order 9066 for such human beings to be relocated to army style barracks governed by the military in the states of California, Idaho, Utah, Wyoming, Colorado, Arkansas, and Arizona. “Many families sold their homes, their stores, and most of their assets. They could not be certain their homes and livelihoods would still be there upon their return. Because of the mad rush to sell, properties and inventories were often sold at a fraction of their true value…The camps were often too cold in the winter and too hot in the summer. The food was mass produced army-style grub. And the interns knew that if they tried to flee, armed sentries who stood watch around the clock, would shoot them.” Adults were permitted to leave the detention camps if they agreed to join the US army, of which only 1200 chose to do so. Even after the war ended and President FDR rescinded the Executive Order, anti-Japanese sentiment continued “as many villages displayed signs demanding that the evacuees never return.” 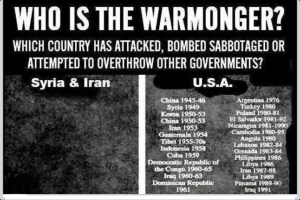 I think the pattern is clear. Thoroughly examine any army conflict in history and you will inevitably find peace loving anti-war sentiment that is brutally subdued in order to encourage the carnal murderous blood bath we call war that is a successful lucrative business for the elite few at the expense of the ignorantly loyal and blindly obedient. It is always the old men that declare the wars and the young minorities that go off and die.

War is not about honor, helping people, and being noble. War is about indiscriminate murder, the raping of women, the collateral deaths of children, and the pillaging of whole cities in order to topple resistant foreign regimes. War is about securing the availability of vital natural resources for the benefit of trans-national corporations, defense contractors, weapons manufacturers, and big government. Make no mistake. War was never about ensuring freedom; it’s about keeping us enslaved to the nationalistic drum beat of death.

Step out of line! Break the ranks! Disobey authority! Be insubordinate and you will find your beloved freedom!

I spent 33 years and four months in active military service and during that period I spent most of my time as a high class muscle man for Big Business, for Wall Street and the bankers. In short, I was a racketeer, a gangster for capitalism. I helped make Mexico and especially Tampico safe for American oil interests in 1914. I helped make Haiti and Cuba a decent place for the National City Bank boys to collect revenues in. I helped in the raping of half a dozen Central American republics for the benefit of Wall Street. I helped purify Nicaragua for the International Banking House of Brown Brothers in 1902-1912. I brought light to the Dominican Republic for the American sugar interests in 1916. I helped make Honduras right for the American fruit companies in 1903. In China in 1927 I helped see to it that Standard Oil went on its way unmolested. Looking back on it, I might have given Al Capone a few hints. The best he could do was to operate his racket in three districts. I operated on three continents.

Smedley D. Butler, War Is a Racket: The Antiwar Classic by America’s Most Decorated Soldier