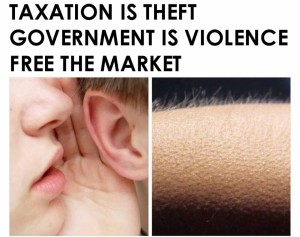 Many people ask me, “But doesn’t your Free Market Capitalism system depend on people being generous angels? Without the State who will regulate the bad industries?” One of the main reasons why Free Market Capitalism works is because most people do want to trade voluntarily and peacefully. This is the only way that wealth is created and civilization develops. Wealth is not created by the wild adventurers of violent conquerors. Indeed this is how the delicate latticework of wealth of isolated peoples is wantonly destroyed.

There will always be the very small minority of psychopathic and sociopathic people who choose to use violence and threats of violence to solve their daily problems. When there exists no institution with the legitimate use of force AKA the State which would attract such vile people, they do not become a threat to anyone. The mafia differs from the State in that nobody hallucinates their use of force to be legitimate. Their commands and edicts are not viewed as laws and regulations. Their robbery is not viewed as taxation. Their kidnappings and murder is not viewed as the War on Drugs or the War on Terror. Their violent extortion racket is viewed as just that, a violent extortion racket.

Wealth is created by the billions of voluntary consensual transactions made by peaceful individuals that occur in the market economy every single day. These individuals likely know little to nothing about the price mechanism, competition, supply and demand, inflation, law of diminishing marginal utility, and Economics in general. Nevertheless unwittingly they are operating in accordance with these natural phenomena. Free Market Capitalism is based on human action. The true hidden beauty is that it is based on peace, love, and freedom.

It is not from the benevolence of the butcher, the brewer, or the baker that we expect our dinner, but from their regard to their own interest.