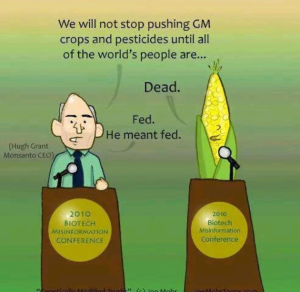 What are GMOs? It stands for Genetically Modified Organisms, or in other words anything, which is not naturally occurring. They are created when scientists remove genes, change genes, or add genes from one species and forcefully insert it into another for the purpose of adding a desired effect or deleting an undesirable one. Just as in our modern day interventionist Keynesian Economics which damages and worsens the economy through currency manipulation/creation (The Mandrake Mechanism) and interest rate fixing; when one attempts to manipulate the traits of living organisms that have taken many thousands or millions of years to evolve, the result is unintended, or intended for the more sinister minded, harmful effects for the organism being experimented upon, other organisms who interact with it in nature, as well as those organisms who consume it. Man did not create plants, animals, and the free market economy and so nothing man does will improve the current affairs. Quite the opposite in fact occurs. The more intervention man employs in the natural plant, animal, and free market economic world will only serve to exacerbate and lengthen any minor glitches that may present. Nature, as in free market economics, has many self-healing mechanisms that automatically correct itself with ease. Future distortions and irregularities cannot be foreseen by any politician, Nobel Prize winning economist, or biotech scientist, no matter how savvy and clever.

One glaring example of this is corn that has been modified to contain the bacterium, Bacillus Thuringeiensis, which makes the corn fatal to insects and other pests. When they eat this GMO corn it immediately destroys their stomachs and digestive systems. The biotech companies however tell us, with indefatigable calmness, this Franken corn is harmless to humans. Are we to believe a company who, after destroying the biodiversity of a plant/animal species proceeds to patent and reap enormous profits off of said species since it is no longer a natural organism but can now be considered a product and therefore subject to US Patent law? Therefore any farmer found to be growing such plants on his farm, even if accidental by windblown seeds from passing trucks, would be the subject of harsh legal actions for years that would, even if proven to be innocent, most likely bankrupt said farmer. When pitted against the enormous deep-pocketed biotech companies such as Monsanto and their legion of lawyers, small organic farmers don’t stand a chance. In addition to all this one cannot even expect a fair trial from the Judicial System, which is in itself a conflict of interest. Aside from the plain contradiction in terms of a branch of government adequately monitoring itself, this is further muddied when one considers the revolving door of International Bankers, Politicians, Congressmen, and Corporate CEOs that is constantly swinging open.

Did you know that Monsanto, one of the largest biotech corporations in the world used to reassure the American people that Dioxin, Agent Orange, and DDT were all safe? Did you know that much of the pesticides, herbicides, and insecticides that came into widespread use following World War II were formerly used as mustard gas and ammunition that were leftover from the war? And now they are telling the people of the world that GMO food is not only “safe for consumption” but also the solution to “global hunger.” Rest assured that polluting the sacrosanct heirloom gene pool passed down from past generations, rendering it illegal for farmers to save seeds, and saddling farmers with enormous debt wherefrom there is no escape is far from a solution to anything. In fact just as with most destructive multi-national corporations with their powerfully irresistible lobbying capabilities, federal subsidies, and cartel formation, this is the kind of behavior that Corporate Fascism rewards luxuriously. Do not confuse this as being a result of the Anarcho-Capitalistic free market. The former rewards recklessness, speculation, and a waste of resources, the latter rewards thrift, prudence, and efficient use of resources. They are beasts originating from different worlds.

Your patronage is deserving of that institution which fosters life in all its manifestations. When you purchase something you are voting for what you want to see more of in the world. Appreciate the dwindling power left in the purchasing power of your fiat paper trash currency, whatever little is left of it. Buy local! Buy from farmer’s markets! Buy raw dairy and raw fermented dairy! Buy water based fermented foods! Buy raw honey! Be your own medical doctor, nutritionist, naturopath, and herbalist! Eat for the body you want, not the body you have! 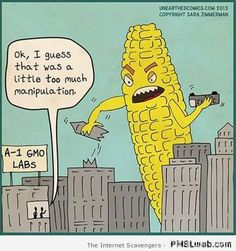 We don’t need a law against McDonald’s or a law against slaughterhouse abuse–we ask for too much salvation by legislation. All we need to do is empower individuals with the right philosophy and the right information to opt out en masse.