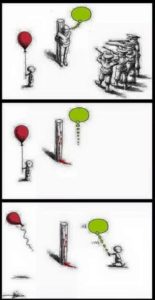 One of the greatest dangers of any thinking person is to supplant one’s deductive reasoning capabilities for the judgment of one in a position of authority. While I certainly do recognize that some are masters in their craft and should rightly be considered authority figures in their field, this is a far cry from abdicating one’s sense of morality and reason to another who would claim to rightfully dominate and subjugate.

People are imperfect and fallible. There is never sufficient reason to forsake your powers of reason. This would betray the very kernel of what it means to be a human being. This would be transform you into the shadow of a human being. Human beings are not built to blindly and unquestioningly obey orders. That is what machines were created for. A healthy skepticism for anyone who claims the moral right to rule is requisite for a just and civilized society.