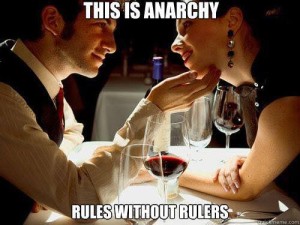 What is conspicuously absent is rulers, those individuals who claim an exemption from the laws of universal morality. They believe they can act in the name of the State and by doing so are beyond reproach. Just as the laws of mathematics, physics, and thermodynamics are universally applied to all and recognize no special status, badge, or uniform; so too do the laws of morality make no exception for any individual. When the people hallucinate a small group people to have this magical exemption, this is the prologue to actions of the most egregious human barbarism imaginable.

We already live most of our lives in Anarchy. For the most part we make our decisions voluntarily, not because someone told us to. This demonstrates that the large majority of the population act in an anarchic fashion, though they would not readily admit it. If something cannot be done voluntarily it should not be done at all. To say that we need the State to do X because the Free Market is insufficient is to say we need rape because then how would we make babies? Anarchy is all around us! Embrace it unconditionally!