Before I reply to your concerns let me just state a few facts that you may have overlooked.

1) “Government” does not exist in itself as the way, I believe, you are envisioning it to exist. It is an insolvent hallucination. It is just that we are all imagining the same hallucination. It is only funded by us, the middle class through the extortion (taxation) or counterfeiting (currency creation).

2) Aside from the few sick manipulative megalomaniacs who strive for positions of power, it is composed of mere humans who have been indoctrinated to believe in it as a separate entity, poisoned by the virus of Statism.

3) For the previous reasons it is at its very core violent and coercive, the very worst of human damnable moral transgressions. There is no such thing as a “good government” since it cannot exist without first stealing, torturing, imprisoning, and murdering its citizens in order to “protect” them from bad people.

4) “Government” is not a good servant and a bad master. It brings out the very worst in people and can never produce any good it espouses to produce since its very foundation is built on extortion, torture, brutality, and murder.

5) The only reason we call our current system “government” and not simply a mafia is because we collectively believe our politicians have a moral right to rule us. Without submitting to this belief they would simply be a gang of thieves, liars, and murderers and their “laws” would be truthfully called threats and commands.

These basic tenets must not be forgotten when considering whether or not we need the fiction collectively known as “government”. Ok with that said I will examine your e-mail piece by piece. 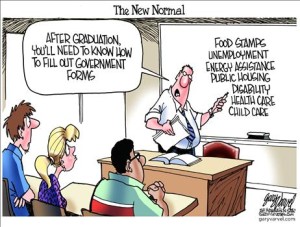 1) “Firstly let me say that there will never be a “perfect” system in place… One reason I feel no perfect system will take hold is because any system would be created by humans who are imperfect and cannot create perfection, except in ones own opinion but not definitively.”

Ok this piece right here is actually an excellent argument for why Voluntary Anarchy is the only viable alternative to Statism. For the exact reason that there is no such thing as perfection by anything manmade is exactly why no “government” composed of people will ever be better than peaceful and free individuals engaging in voluntary businesses exchanges. This part actually proves my point quite well.

2) “When I say “perfect” I don’t mean it as in “there will always be evil people”(although there will be lol) but I mean that even if all humans were “good” and meant well, there would still be conflict.”

Ok this is still not a justification for allowing a few corrupt individuals to “rule” over the throng through systematic theft, violence, and coercion. Because some people are evil does not justify a system of coercion in any way.

3) “With that said there must be some ruling power that has the “final say.” People will always disagree and want things to go their way”

It is true that people will always disagree but I still do not see this as justification to institute a fictional entity known as “government” that exists only through extortion (taxation), counterfeiting (currency creation), and violent coercion (laws, regulations, statutes, permits, certifications etc). I have more faith in everyday people to solve their own problems free of “government” intervention than I have a corrupt vested interest “authorities” to solve it for them. We are adults capable of deductive critical thought. We must stop this childish behavior of always expecting “authority” to save us from our problems. Propagating this fallacy injures everyone else rather than the occasional conflict between two people.

4) “An example would be the one I gave about cutting your lawn and disturbing your neighbor.  Others would be abortion or marijuana use or religion. Take the idea of a cigarette smoker vs. someone with asthma who doesn’t want to breathe 2nd hand smoke. Another would be someone who likes to throw parties vs. their neighbor who wants to read a book in silence.”

Ok I will reiterate my point. None of these examples in no way justifies the institution of a fictional entity known as “government” that exists only through extortion (taxation), counterfeiting (currency creation), and violent coercion (laws, regulations, statutes, permits, certifications etc). Religion is private belief system which “government” CERTAINLY has no business involving itself in. Abortion is choice a woman makes with her own body in the exercising of her sovereign rights, which “government” CERTAINLY has no business involving itself in.  The other two things you described such as marijuana use (or any currently illegal drug for that matter) and cigarette smoking are more aptly described as vices rather than the crimes. Here is the difference between the two.

Disturbing your neighbor while cutting your lawn or throwing loud parties is STILL not a justification for the institution of a fictional entity known as “government” that exists only through extortion (taxation), counterfeiting (currency creation), and violent coercion (laws, regulations, statutes, permits, certifications etc). I’m sure those individuals can come to a reasonable conclusion on their own without resorting to the fictional entity known as “government”. If they can’t and it escalates to a fight then let them fight it out. Either way there will be a conclusion.

5) “With a gov, there is someone who says “ok you can’t party too loud after this time” or “you can’t smoke in this area, but you can in that area” and so on. While these decisions usually leave one or both sides angry, or violated, it is NOT because the gov gave the wrong ruling, it is that sometimes there just is no perfectly correct ruling, no matter who were to make a decision, the people themselves / gov / “god”(lmao) but either way, people would feel like their rights were violated simply because this world is imperfect.”

You keep making the assumption that “government’ is this magical wise group of people that make a much superior decision than two everyday people. You keep proving my point quite well! You would make a splendid Voluntary Anarchist. For the very reason that there will never be a “perfectly correct ruling” it makes no sense to allow a corrupt vested interest “authorities” to solve it for them. Your argument is proving my points. Solve your problems yourself without resorting to the fictional entity known as “government”.

6) “Everyone cannot be equally happy/rich/equal in general because it just doesn’t exist in reality.”

Exactly! You are 100% correct here! Therefore no fictional entity known as “government” that exists only through extortion (taxation), counterfeiting (currency creation), and violent coercion (laws, regulations, statutes, permits, certifications etc) can be better than everyday individuals making decisions and resolving disputes on their own.

7) “Anarchy cannot solve the problems of an imperfect world as it is also a man made creation and it is also imperfect.”

I’m sorry but you are quite wrong here my friend. The word “Anarchy” is simply advocating for a society where everyday people are free and unhampered to engage in peaceful exchange and resolve disputes on their own. It is definitely not manmade. It is the product of no one’s labor. It is simply the opposite of any formal “government” entity which is by its very nature entirely manmade, artificial, and criminal.

8) “The reason I think some sort of gov is better than none is that with anarchy, there would be no 3rd party to decide conflicts. It would be as if each private organization were its own country.”

We must call “government” by its rightful name, the largest mafia on the planet that supports itself through extortion (taxation), counterfeiting (currency creation), and violent coercion (laws, regulations, statutes, permits, certifications etc). When you say “some government is better than none” what you are essentially saying is “some theft, counterfeiting, and violence is better than none.” This like the rapist saying to his victim “If I don’t rape you, then who will?” or the thief saying to his victim “I don’t steal your money, how will you know how to spend it?” No, each private organization would not be its own country, but rather each person would be their own country. After all, what is a country but a chosen territorial jurisdictional delineated by arbitrary lines in the dirt over which the resident gang of thieves, liars, and murderers has control?

Very nice example but alas you underestimate the ability of everyday people to solve their own conflicts peacefully and without escalation. Once you involve the fictional entity known as “government” in the equation it ceases to be peaceful and becomes at once violent, aggressive, and coercive. In this example person B does have a sovereign right to smoke because that act is a vice, not a crime. There is no force or coercion involved. Person A can simply leave the vicinity. He doesn’t have to be there next to Person B breathing it in and complaining that he is killing him, unless he wants to intentionally breathe it in, get sick, and thereafter file a “lawsuit” which is itself another “government” contrived act of retribution. Again here it is best if the two individuals can come to a reasonable resolution to the problem.

10) “A long war might pursue and whichever company had more fire power / money would win so in the end, money would still = power except on a more “personal” scale. Where if I have more money or “private police resources” than my neighbor, then I can do as I please. At least with gov, there is somewhat of a resolution between peers inside of that country. I feel that this is where the public opinion of “Anarchy = Mayhem” is derived from”

Ok I think this scenario is taking it to exaggerated lengths. So you’re saying a “long war” would ensue all because Person A didn’t want Person B to smoke? I find this highly unlikely in the real world, where people are more concerned with supporting their families by producing things of value to society with which to trade with others than they are in pursuing a long war. Please review the definition of what “government” is once again. Is that the public opinion or is that your opinion? 🙂