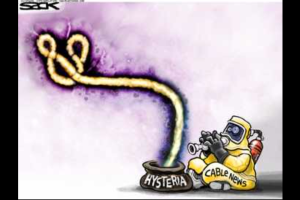 I did not want to write about Ebola since I typically tend to avoid discussing issues that are plastered all over the lame-stream media however this has simply become inescapable. When discussing anything that the media covers we must always keep a few things in mind. First, the media has degenerated into being a marionette mouthpiece of the political elite’s agenda. Second, in order to assess the accurate threat that Ebola poses to Americans we must have a comprehensive comparison of death tolls from other causes. Third, is the absurd trend of past national security viral threats.

The illusion of unbiased opinion the elimination of contrarian perspectives in the mainstream media can be understood when it is realized that in 1983, 90% of American media was owned by 50 companies, by 2011 that same 90% is owned by only 6 companies; GE, News-Corp, Disney, Viacom, Time Warner, and CBS. Furthermore we must understand that we currently live under a Corporate Fascist “government” in which there is a mutual masturbation of “government” subsidizing and bailing out corporate monstrosities and then those monopolistic corporations sending their hordes of lobbyists to bribe politicians through campaign contributions in order to ensure the passage of favorable legislation and barriers to entry that crush the growth of small businesses. Taking this into account the whittling away crushing of smaller businesses that control the media is only natural as State power expands and bloats to gargantuan dimensions. We must realize that when one watches mainstream media we are seeing a fundamentally accurate portrayal of the agenda of the political elite, hence caution must indeed be taken when viewing such nonsense.

Let us count the ways that “government” has used the threat of disease to frighten the populace into compliance of further oppressive legislation; H1N1 (Swine Flu), Mad Cow Disease, Anthrax, Avian Influenza, Escherichia coli (E. coli) and now Ebola. They may be real but they pose about the same threat to our lives as a lightning strike or asteroid. Don’t divert what finite time you have on Earth to worrying about such trivialities. We have enough to worry about in our individual lives such as increasing our skills, keeping our jobs, raising our children, improving our relationships, and loving our families. These are the areas that really matter. This is how you can truly make a difference in the world. Inject more love and passion into the world and you will have done your part to bring about the beautiful world we all desire. Live ever more deeply and love ever more passionately!

If you tell a lie big enough and keep repeating it, people will eventually come to believe it. The lie can be maintained only for such time as the State can shield the people from the political, economic and/or military consequences of the lie. It thus becomes vitally important for the State to use all of its powers to repress dissent, for the truth is the mortal enemy of the lie, and thus by extension, the truth is the greatest enemy of the State.

Joseph Goebbels, German politician and Reich Minister of Propaganda in Nazi Germany from 1933 to 1945