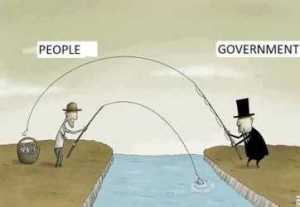 These are only a few questions in my mind that scrape the surface of the endless ways that humanity’s potential for greatness has been stifled and suppressed by “government”. Now I cannot blame all of this on “government” as that would be an oversight of the highest order. We outnumber our oppressors many times over and we are all human beings capable of deductive reasoning and critical analysis. Therefore if our potential for wondrous things is impeded and asphyxiated we have only ourselves to blame. A few hundred sociopaths cannot conceivably physically subjugate 313 million who resist. It is only possible when the oppressed have forgotten or have accepted their servitude as being self-evident and the natural order of things. When the people believe it is necessary to forfeit 1/3 of their annual income to “government” it will continue to be stolen. When the people continue to believe the “Islamic fundamentalists” hate us for our freedoms the wars will continue to be waged. When the people continue to believe their children are being educated in the indoctrination camps known as “government schools” they will continue to exist.

We need “government” in the same manner that a man needs a tapeworm. The State is a myth conjured by the clever sociopaths over the obedient and gullible. Some say “But without the State who would build the roads, protect us from foreign invaders, educate our children, mail pieces of paper, print pieces of paper to be used as currency etc?” The answer to this lies in each of us. We need to stop looking to the mythical patriarchal entity known as “government” to solve our problems and instead look to our community, each other, and ourselves. It might have been similarly asked of the abolitionist of the early 19th century, “But without the slaves, who will pick the cotton?” We will of course!

We must stop thinking of the individual and start thinking about what is best for society.