Excellent interview! I agree with most of what is discussed. I will, however, take issue with two points made; that banning these harmful substances is good or effective as has been done in a few European countries and that the problem with these large corporations is their “profit” motive or bottom line.

Before studying Austrian Economics and Voluntaryism I was thoroughly interested in holistic Eastern Nutrition, Chinese Herbal Medicine, Big Pharma, vaccines, GMOs, and alternative medical therapies. When learning about such harmful products GMOs, vaccines, artificial dyes, preservatives, or additives it is quite natural to come to the conclusion that “government” should ban such things. I used to think this way as well until I learned about the true sinister nature of “government” and its status as a monopoly on initiated force. Not only is “government” incapable of protecting our property and welfare, but it must first rob us of our property and violate our human rights in order to give the façade that it is doing these things, all for our own good by “representing” us. Given this knowledge it can easily be seen how asking “government” to ban something is an open invitation for “government” to do what it does best: control, extort, regulate, monitor, harass, and violate the freedoms of peaceful people. 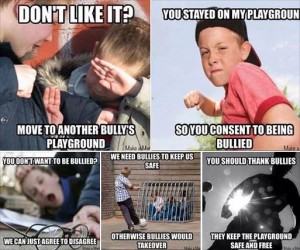 The “government” is morally and financially bankrupt, always has been and always will be. It has nothing to give but toxic lies and stolen loot. If you want something build it yourself, buy it, or get others to help you voluntarily. If you want to earn more money learn new skills to increase your marketability in the market place. Make yourself more attractive for prospective employers to want to hire you and pay you more money. That is how you improve your lot in life. When you ask “government” for anything, you are essentially asking a thief to steal for you, an assaulter to assault for you, and a murderer to murder for you. There is no nobility in this; rather there is only cowardice. In providing value to each other we become free! 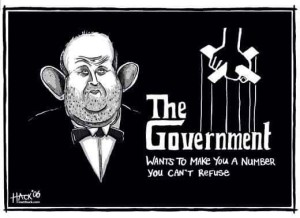 The problem is not that these companies seek out profit. Absent “government” intervention, profit and the price mechanism are beautiful feedback processes that provide valuable information between buyer and seller. Buyers bid prices up and sellers bid prices down. Where these two forces meet determines the price of a particular product or service. It is a self-correcting free market phenomenon that ensures that all parties are getting the best deal. When “government” injects itself into this magnificent process with its violent edicts and arbitrary mandates the result is always a perversion of prices and natural consequences. Political nepotism guarantees that some well connected special interest groups function with sovereign immunity regardless of environmental degradation and human injury. Such groups include Monsanto, DuPont, Syngenta, Pfizer, Perdue, Tyson Foods, Shell, BP, Chevron, JP Morgan Chase, Bank of America, Capital One, Bank of America, Wells Fargo etc. The fault does not lie with these special interest groups as such because although they have massive ties to “government”, their products/services are not forced upon us at gunpoint, rather we buy them willingly, be it through ignorance or complacency, we always have a choice. The fault lies in “government” that provides the sovereign immunity that shields them from any wrongdoing, litigation, or ire that their products/services may inspire from the people. Do not merely cut the hydra head for another one will just grow in its place. Strike at the body! Know your enemy! Vacate the State!

There are a thousand hacking at the branches of evil to one who is striking at the root.

Please enjoy our recent episode of the Seeds of Liberty Podcast. In *honor* of the recent National Extortion Day here in the U.S.S.A., this week we delved into taxation. Herein we discussed taxation as theft vs. a contribution, consent, property taxes, unseen communism, freedom to vs. freedom from, pointing the guns of government at your neighbor, the belief in authority, skewed historical education, do agents of government pay taxes, corporate taxes, sovereign immunity, *Marksism*, and more!

Please enjoy my recent interview with Andrew Demeter. Herein we discussed how he became a liberty advocate, grilling Minority Leader Nancy Pelosi, are all politicians evil, government school, are teachers evil, inflexible system, teaching outdated knowledge, his influences, his interview with Fran Drescher, attacking corporations is attacking the branch of the problem, sovereign immunity, Monsanto hypocrisy, anarchy in the marketplace, freedom of dissociation for entrepreneurs, feminism hypocrisy, homeschooling/unschooling, socialization myth and much more!

It takes a special sort of man to understand & enjoy liberty–and he is usually an outlaw in democratic societies.