In the most recent dispute between the tyrannical federal “government” and the industrious, 67 year old Nevada cattle rancher Cliven Bundy has fiercely defended his position for his cattle to graze on the Gold Butte territory near the border of Utah. In 1990 the federal “government” began the Desert Tortoise Conservation Center to save the endangered desert tortoise. Bundy paid to have his grazing permits up until 1993 when he stopped paying. Then in 1998 the Bureau of Land Management (BLM) designated the Gold Butte area to be “critical’ for the survival of the desert tortoise and began harassing the Bundy ranching family in typical mafia style aggression. Since 1993 when he stopped paying his permit extortion fees he claims to owe the federal “government” $300,000 while the BLM claims it is more like $1 million.

Bundy claims his Mormon heritage has been homesteading on this 600,000 acre piece of land for nearly 150 years and it therefore belongs to him. This is in accordance with Common/Natural Law which states that when one takes an unrefined natural resource such as land and mixes one’s labor with it to produce a product that is desired by others this confers ownership. This is in stark contrast to the federal “government” claiming ownership by a mere pen stroke on a piece a paper without stepping foot on the land or laboring on it whatsoever. This is the harsh reality of expropriation by eminent domain that the Native Americans had to learn through decades of deliberate and malicious slaughter. 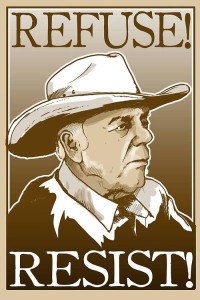 Bundy says “Years ago, I used to have 52 neighboring ranchers. I’m the last man standing. How come? Because BLM regulated these people off the land and out of business.” The BLM states that Bundy can only have 150 cattle out of the original approximately 1000. This would effectively put him out of business as a cattle rancher. He has refused to give up his “trespassing” cattle and so this has warranted the federal “government” sending in taser armed officers, attack dogs, snipers, helicopters and four-wheel drive vehicles to “deal” with the insurgent cattle ranchers. “So far the operation to remove the cattle has cost the US taxpayers $3,000,000, no small sum.”

The justification for all this insanity is the possible extinction of one or two species, in addition to the 99.99% of species that have already gone extinct in the history of planet Earth, is a matter of national emergency and therefore requires the massive spending of taxpayer currency and theft of the prosperity of the unborn amidst a backdrop of staggering debt, unfunded liabilities, and imperialistic genocide. This is the sort of lunacy people agree to abide by when they pay their taxes and obey the “law”. When one denounces a parent for homeschooling their child they say “I went through public school and I turned out ok.” Amongst a nation of lunatics the moral man is considered insane. Do not confuse obeying the man-made statutory “law” with obeying one’s conscience and moral compass. The two are mutually exclusive and cannot be considered in the same breath.

History has proved for time immemorial that the outlaws, vigilantes, and law breakers were the ones who not only talked about societal injustices but actively resisted them in the face of grave physical danger to themselves. Conversely it was the tax payers and law abiders comprising the docile citizenry who, through their obedience and tax funding, enabled most of the horrific atrocities we read about in the history books. Nothing validates tyranny and sociopathy more than silence.

Be the thorn! Be the nail that sticks out! Be the round peg in a society of square holes! Be the non-conformist! Society will thank you for it although in the moment they may violently resist you as surely as abolitionists were in early 19th century America.