What would it be like to explain the concept of “government” to an alien? Perhaps the closest comparison would be a Westerner attempting to explain it to an Australian Aboriginal, Amazon Indian, or Native American Indian. According to Dictionary.com “government” is defined as “the political direction and control exercised over the actions of the members, citizens, or inhabitants of communities, societies, and states; direction of the affairs of a state, community etc; political administration: e.g. Government is necessary to the existence of civilized society.”  It should be curiously noted the sample sentence that Dictionary.com chooses to use. It seems one should take care of political propaganda even through an online dictionary.

I would like to propose an alternative. “Government is the mythical institution fabricated by the sociopathic gangs and marauders that roamed the land before it was outlined on a map. They conquered, subjugated, and physically enslaved every other free human being and their descendents until the very idea of freedom was obliterated from thought. The borders that outline a nation are but the chalk outlines of dead bodies that form the periphery of one sociopathic gang as oppose to that of the neighboring one. It is the coercive monopoly of violent force on the lives of their tax chattel.” 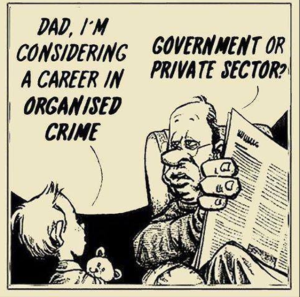 Our political authoritarian control freaks care about us as much as a farmer cares about the cows he uses to extract milk and meat. He gives them shelter, food, and protection insofar as they can provide him with a steady source of revenue. He does not allow them more freedom to roam out of a sense of compassion or empathy for their well-being but with the full knowledge that from their slightly increased liberty, they will be comparatively happier and therefore more productive.

Know and understand the mental cage and shackles so that you may finally be free of them. Remove yourself from the Matrix by renouncing the State in all its illegitimacy! Recognize that no man is your master! You own your body and all the fruits of your labor! For one man to forcibly extract anything which you created or earned through you blood and sweat is the ultimate crime!

To be GOVERNED is to be watched, inspected, spied upon, directed, law-driven, numbered, regulated, enrolled, indoctrinated, preached at, controlled, checked, estimated, valued, censured, commanded, by creatures who have neither the right nor the wisdom nor the virtue to do so. To be GOVERNED is to be at every operation, at every transaction noted, registered, counted, taxed, stamped, measured, numbered, assessed, licensed, authorized, admonished, prevented, forbidden, reformed, corrected, punished. It is, under pretext of public utility, and in the name of the general interest, to be place under contribution, drilled, fleeced, exploited, monopolized, extorted from, squeezed, hoaxed, robbed; then, at the slightest resistance, the first word of complaint, to be repressed, fined, vilified, harassed, hunted down, abused, clubbed, disarmed, bound, choked, imprisoned, judged, condemned, shot, deported, sacrificed, sold, betrayed; and to crown all, mocked, ridiculed, derided, outraged, dishonored. That is government; that is its justice; that is its morality.

Pierre-Joseph Proudhon, General Idea of the Revolution in the Nineteenth Century