An oft repeated but erroneous assertion is “Money is the root of all evil.” How can this be so? Money is simply an inanimate object. How can an inanimate object be blamed for anything? If a civilian man murders someone with a gun does the gun go to jail? If he murders someone with a chainsaw does the chainsaw go to jail? Guns, chainsaws, and anything that one person might use to harm another person can all be used for the purposes of good as well as evil. If a computer program malfunctions, do you blame the program or human programmer? I hope the idiocy of this assertion is apparent.

Before free and peaceful people chose money, barter was the trade method of choice. This carried with it inherent problems which included lack of coincidence of wants, lack of division, lack of common measure of value, and lack of store of value. Money and currency were borne out of necessity as communities grew.

Money is a tool chosen by free and peaceful people to trade amongst each other. It was chosen because it satisfied certain criteria that facilitated trade. These criteria include portability, divisibility, fungibility (interchangeability), durability, and store of value. Now there is a fundamental difference between money and currency. Currency is all those things minus being a store of value. It can be controlled by “governments” in the form of Central Banks and legal tender laws however this is not necessary. Some examples of currency not controlled by “governments” include tobacco, exotic bird feathers, colored beads, stamps, candy bars, nails, copper, lumber, axe heads, sea shells, salt, sugar, spices etc. All of these substances satisfied some criteria of money but lacked one or two others and so were eventually abandoned. 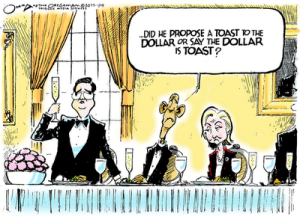 Eventually about 5000 years ago precious metals, more specifically gold and silver, began their use by free and peaceful people. Although “governments” have, over the millennia, attempted to control, standardize, and issue its use, these efforts have always failed. Precious metals always retain their intrinsic value and therefore are a wonderful protection against deficit spending, pork barrel spending, warfare, imperialism, and grandiose public works that insane “governments” frequently try to fund through taxation and debt. The market can only be unnaturally stretched and distorted so far by “governments” before it snaps back. When this snap back occurs beware! For it is during this phase that much of the illusory wealth disappears, as gold/silver do an accounting for all the excess fiat currency, government bonds, and debt that was created during the distortion. This is known as the boom/bust cycle. This economic mechanism has been in effect, in an exaggerated way, for as long as “governments” have sought to meddle and intervene in so called “monetary policy”.

As long as we allow our “government” through Central Banks to control and manage our money we will never be free. It is a rigged game on an uneven playing field. It is playing monopoly with someone who can print unlimited amounts of currency. Far from money being the root of all evil, money is at the root of human trade and therefore plays an integral role in our economic health and vitality. Support the black market! Support the counter economy! Get your wealth out of fiat currency and SIFI banks! The State can be defeated, not by violent revolution, but by economic self-sufficiency and by withdrawing support of a decadent and predatory system. Simply remove nourishment from the parasite and it will necessarily shrivel up and die without the application of any force whatsoever.

Due to Gresham’s Law gold and silver started to disappear from circulation from 431-404 BC as people spent the government enforced copper coins and hoarded the gold/silver coins. Suddenly it took a whole bunch of copper coins to buy a gold/silver coin. This is the first time gold or silver ever had a price. Before that everything was measured in a weight of gold/silver.