Today is “Remember-the-hired-tools-who-died-while-murdering-raping-and-pillaging-third-world-countries-for-politicians-and-banksters” Day, AKA Memorial Day. It is quite tragic when young teenagers are snatched while still in their innocence and sent to be hired mercenaries based on lies and propaganda. Perhaps it could be rationalized as the logical extension to 12 years of “government” indoctrination, the culmination of an exciting career of being an obedient pawn of the State. Just as the State knows only brute force, coercion, and violence to solve problems; the same can be said for its hired attack dogs known as the police and the military. They are not agencies known for their tact, wisdom, and delicacy, nor do they attract those who possess any measure of intelligence. In fact police departments would intentionally reject any applicants due to their excessively high IQ. Increased intelligence does not harmonize well in a job of mindlessly obeying orders, often to the detriment of peaceful people. 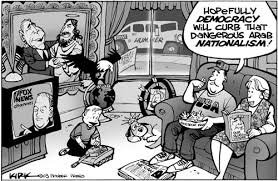 Some may say, “But they died for our freedom! The fact that you can speak now is because they have died for your freedom of speech!” That may have been their initial noble reason for joining but as we all know; the road to hell is paved with good intentions. The result of their desire to help the innocent and protect our freedoms has been an undeniable disaster; perpetual warfare since World War II, genocide, mass murder, fiat currency creation, crippling debt, indiscriminate drone strikes in multiple countries, 900+ military occupations, collateral damage, millions displaced, destruction of infrastructure, fomentation of anger and hatred for the US to name just a few. The US military interventionist acts of aggression throughout the globe have solidified its position as the only true terrorists and the primary threat to freedom everywhere. What started out as the smallest mafia on the planet, the US “government” has swelled to gargantuan proportions eclipsing the horrors of Communist China, Soviet Russia, and Nazi Germany.

Freedoms and rights are not inherited notions. They are not granted to those who politely ask. They are taken by those who demand them by their words and defend them by their actions. If a man tells you he wishes to protect you from other evil men by extorting more currency from your pocket and by limiting your freedoms; then you must consider the distinct possibility that your protector is, in fact, your oppressor. Every tyrant in history who committed unspeakable atrocities emerged onto the political scene not as a tyrant but as a savior or protector.

The Nationalist not only does not disapprove of atrocities committed by his own side, but he has a remarkable capacity for not even hearing about them.