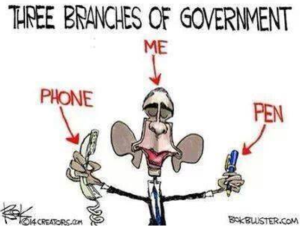 It doesn’t matter if you call yourself a member of the Democrat party, Republican party, Green party, Liberal party , Conservative party, or even Constitution party. If you seek to gain access and use of the greatest mafia in the land known as “government” then you are just another righteous do-gooder who thinks he knows what is best for everyone else and will use the guns of the State to achieve that goal by any and all means necessary. Even if you are a Constitutionalist and seek our “government” to shrink and only abide strictly according to the US Constitution, you are still advocating for the theft and violence that is justified by a piece of paper with ordinary words. By the way never in history have pieces of paper ever restricted the insane whims of genocidal megalomaniacs. Millions have died obeying and believing in the myth of “government” that this piece of paper warrants.

In Plato’s “The Republic” he speaks of philosophers as being the only suitable type of people to rule as king. The analogy is that just as conductors are ideal to lead the orchestra due to their general and extensive knowledge of all the instruments; so too are philosophers ideal to lead the people due to their general and extensive knowledge of human behavior. One vital flaw in this reasoning is that those who populate the orchestra voluntarily decided to join the orchestra and willingly perform under the direction of the conductor. The same cannot be said with people under the rule of “government”. Nobody asked to be born in a particular country and nobody signed a contract to abide by its commands and regulations. Nonetheless our “consent to be ruled” is implicit in our physical presence. Nowhere in any other relationship is this strange situation seen other than that of “government” and the governed.

As Stefan Molyneux would say, if you believe you can enter the leviathan that is “government” and turn it into a force for good, it is better that you start on a smaller scale first. Try to infiltrate the mafia and turn it into a charity. Try to infiltrate the KKK and turn it into a black brotherhood. Do that and I will believe you can turn the “government” into a force for good. Fail to do that and you are just another talking head who speaks in vague deceptions and insignificant tautologies. You are just another petty sociopath who believes he has the answers to all of life’s questions and everyone should live according to your limited understanding of the world.

If you really want to make a difference, then lead a life that is worth emulating. Lead by example rather than by decree. If you truly seek to change and improve the world, then first seek to change and improve yourself. People do not follow mere words, they follow virtuous deeds. Stop vying for the reins of power. Stop vying for use and control of the gun. Put the gun down. Surprisingly humans are more creative, loving, and compassionate when they do not have guns pointed at their heads.

Hell is empty and all the devils are here.