A bill is currently attempting to be passed in Washington to enact a statewide minimum wage of $15. This is sparking a lively discussion on the topic since it would effectively double of the current federal minimum wage of $7.50. Proponents of the minimum wage say this is necessary in order to keep up with inflation. They assert, “We need to get paid a living wage!” The inconsistencies with the minimum wage reasoning are threefold. The first is that all employees will be receiving this new and improved wage. The second is that wealth is created at a whim by political decree. The third is that dubious definition of the term “living wage”. The fourth is that inflation is a natural motion of a healthy economy.

The very existence of the minimum wage presupposes the erroneous notion that where it not for politicians we would all be making $1 per hour because “greedy capitalists could pay their employees any arbitrary amount of currency. The reality is all businesses exist in direct and indirect competition with other businesses over the acquisition of labor. It is this competition that determines the apropos market value of labor, not the “greedy capitalists”. It all boils down to skills. If you possess more skills you will get paid more as your value to the company is proportionately enhanced. Minimum wage laws only disrupt this natural self-correcting mechanism by introducing force and violence into an otherwise peaceful agreement between employer and employee. 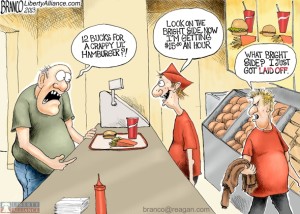 If a worker is making the current minimum wage of $7.50/hour and is producing $10/hour of value to the company, this equates to $2.50/hour of profit for the company. If the new $15 minimum wage law is enacted this significantly changes the dynamics. Now the employer is forced to pay this employee $15/hour, however this employee is still only producing $10/hour of value, this equates to a net loss of $5/hour for the company. In order to stay in business the employer must either appreciably reduce his hours or fire him. If not then he will eventually go out of business. Businesses operate to make currency, not lose it.
The definition of inflation is an increase in the money supply. This can be through the mining of precious metals in gold/silver based economy, through the efforts of the small scale amateur basement counterfeiter, or through the massive legal counterfeit operations of a Central Bank AKA the Mandrake Mechanism, increasing the currency supply, or currency creation.  The destructive repercussions of the first two are negligible in comparison to the elephantine effects of the latter. The colossal currency creation of the Federal Reserve, or legal plunder, is the real culprit for the distortions in the economy that produces the Boom/Bust cycles and has caused The Great Depression. Inflation is a symptom of a hijacked economy by a Fascistic group of elite bankers. It is antithetical to a healthy Free Market economy.
After all this we must conclude that it is not the politicians that create wealth, rather it is the multitude of workers and business owners who daily toil to create and innovate the products we cherish. Writing down a command on a piece of paper and then backing it with a gun does not ensure anything but unemployment, job displacement, poverty, and increased State dependency. Understand that politicians have never given anything to the people that they did not already possess. Everything “government” says is a lie and everything it gives was first stolen from someone else. Never forget that.

Unfortunately, the real minimum wage is always zero, regardless of the laws, and that is the wage that many workers receive in the wake of the creation or escalation of a government-mandated minimum wage, because they lose their jobs or fail to find jobs when they enter the labor force. Making it illegal to pay less than a given amount does not make a worker’s productivity worth that amount—and, if it is not, that worker is unlikely to be employed.

Thomas Sowell, “Basic Economics: A Citizen’s Guide to the Economy”