As Voluntaryists we often resist participating in any way “within the system” to effect any meaningful change. However “Jury Nullification” is one of the most effective means by which everyday citizens can throw a monkey wrench into a corrupt system. If enough monkey wrenches are thrown at the machine, hopefully it will bring the stagnant status quo crashing down into the pile of mephitic toxic waste that it is. “Juries in criminal cases are generally, as a rule, required to reach a unanimous verdict, while juries in civil cases typically have to reach a majority on some level. If a defendant has been found guilty of a capital offense (one that could result in the death penalty if the person is eligible) then the opinion of the jury must be unanimous if the defendant is to be sentenced to death. Currently, two states, Oregon and Louisiana, do not require unanimous verdicts in criminal cases.” In these states a verdict of 10-2 is sufficient for conviction. Since the majority of states require a unanimous decision among the jurors, just one dissenting juror can result in a “Hung Jury” where a deadlock is reached and movement cannot be made forward in the trial. This is unbelievably empowering for those who oppose the State. Whilst complete dissolution of the State is a noble goal, it is also the most extreme of goals. It may be helpful to retain this objective whilst simultaneously eroding the foundations of the State from within through education and the practice of Jury Nullification. 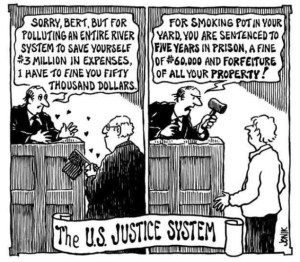 Everyone who serves on a jury must understand the principle “If there’s no victim, there’s no crime.” If we use legality as the yardstick, by which to measure what is right, then the Holocaust, Apartheid, Chain Slavery, Stalin’s Great Purge, Mao’s Great Leap Forward, Pol Pot’s genocide etc were all legal and therefore were all right. There comes a point at which every person must decide whether to obey one’s moral compass or obey one’s conscience. They are mutually exclusive actions. Most sane people know and understand that theft, rape, assault, and murder are all morally wrong and therefore do not use violence to solve problems in their daily lives. This moral principle applies ever more importantly in the realm of “government”. For if it is wrong for one person to murder, that breach of morality is not magically altered when murder is done on a grand scale, to the sound of trumpets, waving pieces of colored cloths, and chanting a fictitious deity.

It is not only the juror’s right, but his duty to find the verdict according to his own best understanding, judgment and conscience, though in direct opposition to the instruction of the court.