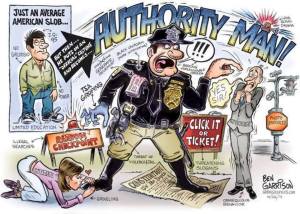 “It’s not hard to imagine a scenario where foreign powers come in and loot our country worse than the globalists do today.”

“Anarchism, like other idealistic belief systems, is a Utopian model.”

Any “government” or “ism” is the utopian ideal for some groups of people. The difference is all of these “governments” must exist by violence and coercion. They must force their edicts, laws, and mandates onto the people against their will and for their own good. This is the beginning of every oppressive totalitarian, communist, or socialist regime and the collapse of every great empire. Good ideas do not require force.

“Humanity has a long way to evolve before we are ready.”

Who determines this? You? I think you give far too much credit to the monopoly on initiated aggression known as “government”. It has done nothing for humanity. It has only brought bloodshed, suffering, violence, and war.

“As we have seen with Civil Rights, Gay Rights, cannabis legalization, and other mass movements – real change is possible and inevitable when people band together for common cause.”

It is my goal to educate people that these are but minor infinitesimal issues when compared with the over-arching notion of “government”. They are tilling the soil with a teaspoon when what they need is a metaphysical excavator.