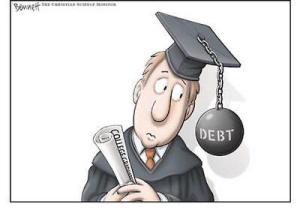 At one time tertiary education used to mean something when those who entered were there because they could actually handle the course work and had the drive to excel in their field. Degrees were rare and therefore an accurate reflection of an individual’s intellect and competency. Employers would regard college/university degrees in much higher regard due to this scarcity. This is simple supply/demand economics.

Once the federal “government” began sticking its criminal hands into the student loan business by ensuring those loans with stolen loot to anyone with a pulse, as with anything that is corrupted by “government” involvement, the quality plummeted and the price skyrocketed, as is reminiscent of any “government” subsidized industry. As universities began noticing the sharp rise in federal loans they raised their prices, as any sane institution would do when receiving a secured income. This has caused the artificial swelling of university staff, buildings, and equipment. A bubble has been coming to fruition, which is only now coming to its apex. At approximately 1.2 trillion Federal Reserve Notes, the student loan debt bubble is second only mortgage debt in the US.

It is now believed to be common knowledge that anyone who chooses to get ahead in life or obtain a reasonable job must go to university and assume massive amounts of debt. Approximately 70% of all university graduates do not get a job in their field of study and instead work in places that do not require a degree such as McDonald’s, Starbucks, Wendy’s, Taco Bell, Lowe’s, Home Depot, and Dunkin Donuts. These poor unfortunate and misguided souls who are shackled by debt for the better part of their natural lives then go on to increase institutionalized violence by voting and petitioning for an increase in the minimum wage and student loan debt forgiveness. They are imploring “government” to subsidize their wretched decision-making at the expense of the industrious. 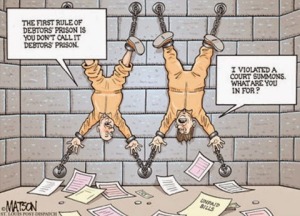 Student loan debt forgiveness is among the most laughable and pitiful of their pleas. They assert that it was society that “forced” them into debt and they should therefore be magically absolved of all their economic ignorance. If this insanity were to occur, what kind of message would that convey? This is known as moral hazard. If a reckless gambler were to get into massive debt and some angel were to come along and pay off his debts or supply him with more funds to continue his addictions, would this encourage him to gamble more or less? We all respond to incentives. Universities and their students are no different. No one is exempt from the laws of economics. Although politicians may claim exemption, the best they can do is delay the inevitable economic consequences of their disastrous decisions. Take what you want and pay for it. This is the way of true civilized men and women.