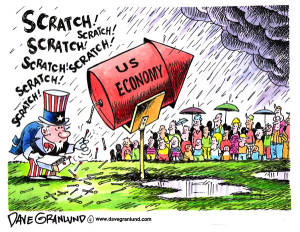 July 4th is revered as our nation’s birthday and is regarded as one of the greatest celebrations of freedom and independence. Many Americans have spent it watching the State subsidized World Cup, eating charcoaled barbecued meat, drinking mind numbing beer, partaking in an American flag decorated cake, saluting a piece of red, white, and blue cloth symbolic of our oppressors, watching the repulsive Nathan’s hot dog eating contest, watching fireworks displays funded by stolen taxes, and by shouting, “America is number one! Freedom!!”

The level of unthinking barbaric nationalism steeped in this day rivals the Super Bowl. If ever there was an accurate portrayal of the witless brutishness that infects the masses of a democracy this would be it. Men acting as individuals are creative geniuses. Men acting as a collective mob become callous, cruel, and horrific. The collective is a headless beast that acts without recourse to logic and reason. Verily these Socratic ideals are only capable of the individual. When we advocate for any Nation-State we become the willing executioners of philosophy upon the altar of “government” and the myth of authority. 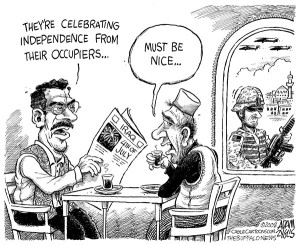 Americans would do well to study true history and Austrian Economics. These are painful endeavors precisely because they reveal the true nature of our current enslaved state. When any aspect of the carefully constructed Statist lie is examined under the microscope of logic its flimsy house of cards nature is revealed. Many would sooner cling tightly to their comfortable lies than pursue painful truths. This is the path of least resistance and is entirely understandable. However this soft obedience is exactly how we have degenerated into a world of Central Bank fiat currency, imperialistic warfare, parasitic welfare, rule by mob, thieving taxation, drowning debt, legal plunder, regulatory capture, sovereign immunity, sociopathic politicians, suffocating small businesses at the expense of politically connected Corporate whores etc.

We are enduring what we have heretofore allowed, nothing more and nothing less. The violence, corruption, and abuse stops when we stop feeding it with our attention and participation. The State is a parasite that only continues to thrive because we have fabricated intricate moralizations and pious justifications for its existence. It is a balloon that is held above us by our collective hot air. It will end the moment when we remove our precious breath; it will end the moment when we scratch it off our neck and no sooner.

Nationalism does nothing but teach you how to hate people that you never met. And all of a sudden you take pride in accomplishments you had no part in whatsoever, and you brag about- and the Americans’ll go “Fuck the French! Fuck the French, if we hadn’t had saved their ass in two World Wars, they’d be speakin’ German right now!” And you go, “Oh, was that us?” Was that me and you…I checked my pants, there’s no mud stains on the knees from where we were garroting Krauts in the trenches at Verdun. I think “we” didn’t do anything but watch sports bloopers while we got hammered. I think “we” should shut the fuck up!