There are many blatant double standards that clothe the local monopoly on violence known as law enforcement. When some people are given superhuman rights over other people simply by virtue of their shiny piece of metal, costume, or special hat and are thus able to interpret the arbitrary political edicts at their discretion to murderous ends with immunity, it is quite apparent that we do indeed live in a state of chaos and disorder. They are entirely unaccountable for their actions and do not respond to the incentives and feedback mechanisms that bind the actions of a private security agency. Regardless of their heinous actions they will get paid through extorted funds, so what then is the incentive to treat the populace as customers to be satisfied? Rather the populace is viewed more and more as sheep to be frightened into submission. 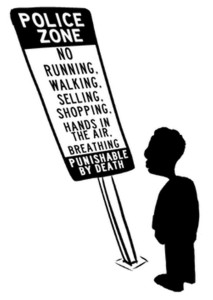 This also illustrates the lunacy of the notion “equality under the law”. When there is clearly a difference between the rulers and the subjects or the lords and their serfs, equality under the law becomes a laughable notion accepted only by the morally blind who, no doubt, have been raised to believe such contradictory nonsense through their “government schooling”. There never existed equality under the law, even back when the Constitution was just written, for the very reason that there has always been a clear separation between lawmakers and law-abiding citizens. It is the mark of a successful representative democracy to persuade the peasants into believing that they can influence the violent legislation that subjugates them nay that they are in control of their “government” at all. Man-made laws are ideas so good that they must be forced upon the population by pain of death. 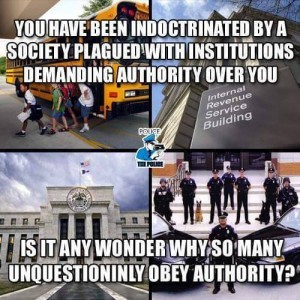 We live in an era of the appeal to force AKA argumentum ad baculum. He who has the bigger guns rules. In our current society it is “government” who holds most of the guns. By this logic if “government” can kidnap, cage, or murder you then they must be the rightful authority of all things moral and just. Just like superior numbers do not change the laws of morality so too does superior force not change the laws of morality. They may have most of the guns but their true power lies in the belief in authority AKA argumentum ad verecundiam. When the people stop believing “government” has such superhuman rights and stop giving them legitimacy for their evil, then they will be recognized as the liars, extortionists, thieves, molesters, rapists, and murderers that they are. The extent to which we choose to interact with our neighbor through the violence of “government” is the extent to which we have failed as a civilized society. The extent to which we live by the sword instead of by the plough is the extent to which we have chosen to become the monsters we fear our neighbors to be. Let us put the guns down to slough away our medieval Statist shell replete with mandates, rulers, and taxations. Let us relegate Statism to the dustbin of history along with the other demon children it has spawned such as war, genocide, chain slavery etc. Let us finally emerge to recognize the dawn of man’s true Renaissance, the age of voluntary interaction amongst peaceful people. When no one obeys, no one rules! 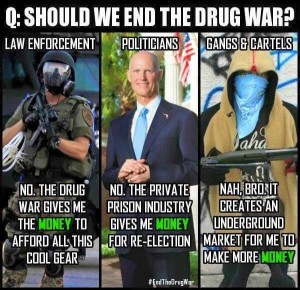 A free market in police would reward efficient and courteous police protection to customers and penalize any falling off this standard. No longer would there be the current disjunction between service and payment inherent in all government operations, a disjunction which means that police, like all other government agencies, acquire their revenue, not voluntarily and competitively from consumers, but from the taxpayers coercively.