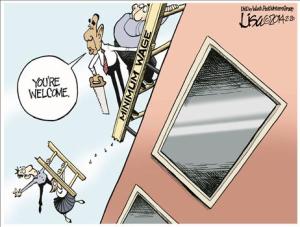 Minimum Wage “laws” create more unemployment, poverty, joblessness, and foster gang violence. The mechanism by which this is achieved is easily understood when one takes into account basic Economic theory. In an environment wherein there is complete economic freedom, AKA true capitalistic free markets, an employee may engage in a voluntary contract with an employer at any specified wage. This agreement is entirely voluntary as no fraud or initiatory force has been committed therefore no injustice has been committed. If there’s no victim, there’s no crime.

Some may argue, “We need to pay them a living wage!” What does this vague term “living wage” even mean? Who determines what a “living wage” is? In reality this term means absolutely nothing. It is hypothetical Keynesian nonsense. There is no such thing as a “living wage”. It is a term used by those who seek to use the violence of “government” to force unequal people to be equal, force the industrious down to the level of the slothful, and to reward the unskilled at the expense of the skilled. Besides the obvious insanity of this collectivist intent this effect is never actually realized. What actually happens is far more sinister. 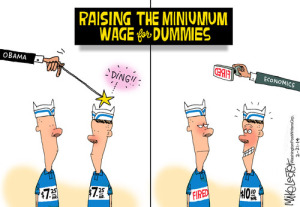 Far from being an employment law, minimum wage laws are unemployment laws. By outlawing certain voluntary agreements from taking place they guarantee the creation of a permanently poor underclass that must appeal to “government” to support them in their poverty. As history has shown, once a particular generation enters into this “government” dependent class they must exert elephantine efforts to lift themselves out of it. It becomes a rut that is taught and passed down to the successive generations creating an ever-enlarging welfare state that is all supported and funded by the hard working productive class.

Minimum wage laws are truly ingenious ploys to win votes from the unthinking masses that hear the rhetoric of the “living wage must keep up with inflation” without ever stopping to think why this situation exists at all. Contrary to the propaganda our fearless leaders feed us; inflation is not a natural state of any economy. It represents massive monetary manipulation, interest rate rigging, and fiat currency creation. These are the culprits of higher commodity, housing, and food prices. They are not the result of greedy business owners or selfish landlords. Know your enemy!

Apart from blaming the State there are real things you can do to improve your earning capacity. Read more books! Acquire more skills! Apprentice under those skilled in the field you wish to learn!  Start your own business! Stop depending on other people or “government” for your economic survival. No one is responsible for your failure but yourself! Genius is as common as dirt! Use it! 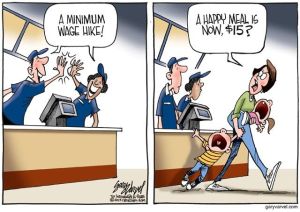 It would be comforting to believe that the government can simply decree higher pay for low-wage workers, without having to worry about unfortunate repercussions, but the preponderance of evidence indicates that labor is not exempt from the basic economic principle that artificially high prices cause surpluses. In the case of the surplus of human beings, that can be a special tragedy when they are already from low-income, unskilled or minority backgrounds and urgently need to get on the job ladder, if they are ever to move up the ladder by acquiring experience and skills.