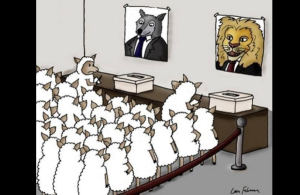 Many of us were taught in our “government schools” that voting is our civic duty and that it is the way we exercise who we believe should be governing us. I will make the case that voting is at best a suggestion box that slaves use to pitifully beg their political masters for more scraps from the table and at worst a violent intent to use the guns of the State to further one’s moral self-righteousness.

Assuming voting has any useful effect on the outcome, the very essence of Democracy is that, through voting, the majority can forcefully impose their will on the rest of the population regardless of individual rights. It is the disgusting intent to delegate to politicians the criminal act of robbing one’s neighbors that one is too cowardly to do oneself.  This is typical lynch mob morality and is nothing to be proud of. The group does not possess moral virtues that is absent in the individual, in fact historically it is shown that people in groups act with much more blatant brutality, barbarism, and insanity than they otherwise would acting individually of their own devices. Some may point out “Well we don’t live in a Democracy. We live in a Republic!” This may be true but cite me an enduring example in history when a Republic, or any form of “government”, has ever respected individual rights or property rights regardless of worthless Constitutions and Bill of Rights? You would be hard pressed to find such an example.

It is more likely that voting is a useless plea to our rulers hoping in vain that they return some of the currency they stole from us, recover some of the rights they trampled over, lessen the economic destruction wreaked on the market by their interventionist policies, or restore some of the stolen prosperity that fiat currency plunders from the unborn. Ask the black slave of the American south during the early 19th century if they believed working within the system was a useful method for change. One would sooner see unicorns jump over rainbows than reasonably expect politicians to reduce their power over the multitude. This prospect is simply not in the realm of the sane.

Do not delude yourselves into believing you have a choice. The choice of what color the boot is that is stamping on your face is not the type of choice one should be proud of making. Do not participate in this farce. It only invalidates you as a human being and brings you down to the level of sociopaths. To ask for permission to be free is an open admission that you are not free! Recognize no man as your master! You are your own master! 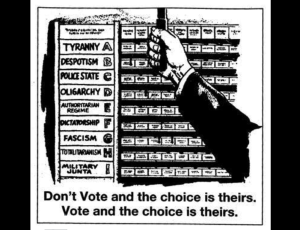