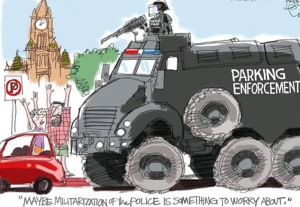 This video does not advocate violence, contrary to the initial knee jerk reaction one may have to the title. Using defensive force to resist institutionalized aggression is not equivalent to the initiation of force daily perpetrated by the monopoly on violence we all understand as “government”. The only difference between the State and the mafia is size. The US “government” is simply the largest mafia of the land, claiming dominion over an immense geographical region inhabited by roughly 313 million individuals. It asserts its authority through the incessant and outright initiation of force. Serfs must constantly be taught where their inferior place is, lest they forget and live voluntarily and peacefully. Perish the thought!

Although we may call those in power sociopaths and tyrants, they do not work alone. For without the industrious funding their agenda through taxation and without a steady supply of petty thugs enforcing their agenda through unconditional obedience, they are simply twisted old men behind the curtain using pyrotechnic phantasmagoria to keep the public in a constant state of awe and fear. These “police officers” are the formerly decent and moral human beings that are attracted to this promising job of serving and protecting the people, only to find that they instead end up viewing the people as cows to be milked or sheep to be herded directly to the slaughterhouse. 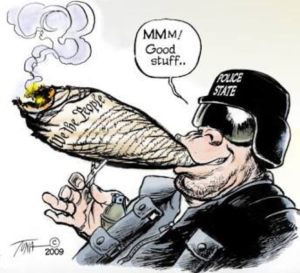 Law enforcement is the polar opposite of a private security agency. The former receives guaranteed funds through “government” and therefore has no incentive to offer good quality service in the form of security and protection. On the contrary their loyalty to the arbitrary “laws” of politicians brings them respect and notoriety among their peers at the expense of the people as can be noted through the rampant police brutality that surfaces daily. Being part of “government” it is an artificial monopoly and is not subject to the laws of supply and demand. The latter, being a business like any other, exists as a direct result of the patronage of its customers. Customer satisfaction and quality of service is its sole mission. It competes with other private security agencies for customers and therefore would not tolerate abuses of power by their employees as they would simply be fired. This simple element of competition eliminates any possibility for brutality of any kind; as such a corrupt company would simply go out of business if it proves to serve no useful purpose to the marketplace.

When a “government” seeks to dominate and control foreign lands it is known as imperialism. When it seeks to dominate and control everything that lies within it fictional boundaries known as “borders” this is known as totalitarianism. The unmistakable militarization of our law enforcement is characteristic of any empire which swells and metastasizes to gargantuan proportions. History has demonstrated this cancerous growth to be the last death throes of an empire before it collapses into utter ruin. It can only be sustained by the obedient who would do any deed with the excuse of “I’m just doing my job.” or “Don’t blame me I didn’t write the law!” Clearly it is not the petty thieves or law breakers that we must fear, but those who are compelled to follow orders, whatever the human cost.

There is something about the state putting the power to bully into the hands of subnormal, sadistic apes that makes my blood boil.