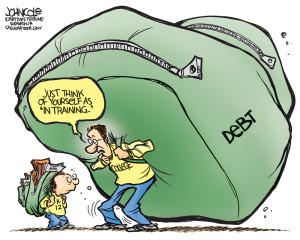 Growing up in our Statist society we were all exposed to the mantra “Get good grades in school so you can go to a good college/university. Get good grades in your college/university so you can get a degree and get your dream job. Then you will live happily ever after.” It’s also nice to believe in the tooth fairy, Santa Claus, and the Easter Bunny however at some point we must snap out of it and grow up.

Tertiary education never guaranteed anything except a waste of years and, for most, an outrageous student loan debt to service for decades. To send a young adult into the workforce already in debt slavery and then say “Well if you didn’t go to a university it could have been worse.” is demonstrating a special brand of sadism. Statistically speaking approximately 70% of tertiary education graduates do not get a job in their field of study. Rather they end up in jobs that require no degrees of any kind, such as Dunkin Donuts, McDonalds, Burger King, Home Depot, Lowe’s, Taco Bell, Wendy’s etc. This is not to demean these jobs as they do provide those with little skills a means to gain useful skills in order to later get a higher paying job down the road. However for one to have obtained a 4-year degree or 6 year degree to later concede to getting such a job is an absolute admittance of failure in every respect. 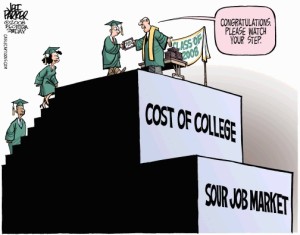 A piece of paper is just as worthless as currency, as a Constitution, and as a degree. In all cases it leaves the holder believing he has something tangible and real. In all cases it leads to utter disappointment and dejection. A college/university degree is simply a piece of paper that signifies the successful obedience of one’s professors. If, in order to learn something, you need to pay, or more often borrow, thousands of Federal Reserve Notes for an old man to be reading to you from a textbook, this is not a favorable reflection of your self-motivation, drive, and capacity for learning.

The emergence of the internet completely revolutionized how we acquire information. When the limit to one’s knowledge is the creativity one may employ in the Google search bar, the uncomfortable possibility may have been realized that the ancient bricks and mortar institutions we used to conflate with knowledge have been rendered irrelevant and obsolete. Do not be among the legion that still clings to an archaic ideology. 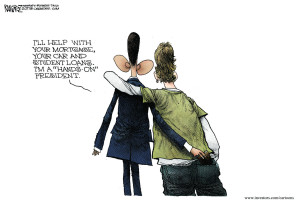 A university is just a group of buildings gathered around a library.

Every year, many, many stupid people graduate from college. And if they can do it, so can you.