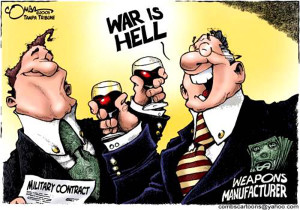 Here in this video, Alan Watts discusses the nature of warfare and how human beings have been led to believe that salvation and peace will magically rain down on our land if we kill innocent people we have never met and with which we have more common than with our own rulers. Everyday decent people do not seek out war or even use violence to solve problems in their daily lives. Even when they vote and petition their political masters to pass certain legislation, they do not think these actions through to their logical violent conclusions. They simply believe these are what sensible and good natured people do to make change. Nevertheless this ignorance does not change the fact that their well intentioned actions, through the empowerment of “government”, bring about the coercive violence that “government” uses to solve any and all problems.

Decent and good natured people join the military for various reasons. Some for a lack of funds to attend a university, some for the chance to “see” the world, some for the “discipline”, some to learn a trade, and many because they have been duped into the awe inspiring flag waving mental illness known as Nationalism. There are other more humane ways of “seeing” the world rather than by intimidating, subjugating, and killing the foreigners you meet there.  This is more the behavior of a conqueror than a visitor. Those who join for the “discipline” should perhaps seek other less masochistic methods for attaining internal strength, as there are many. Those who join to learn a trade again do so at taxpayer expense and that of the unborn, a profoundly nefarious idea when you reflect on it deeply, especially if you have children of your own. 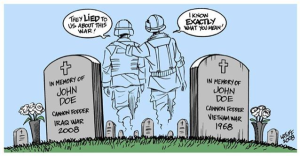 Those who join as a result of the mind altering delusion of Nationalism are by far the most dangerous. They are forthright in their proclamation that the piece of dirt they happen to occupy is the superior land and they must therefore engage, infiltrate, and destroy those that occupy other pieces of dirt who simply believe they are human beings deserving of equal self-respect and dignity. The first psychotropic drug that is Statism has led to more maiming, dislocation, and mass murder of countless people than have all the religions of the world.

It is forbidden to kill; therefore all murderers are punished unless they kill in large numbers and to the sound of trumpets.